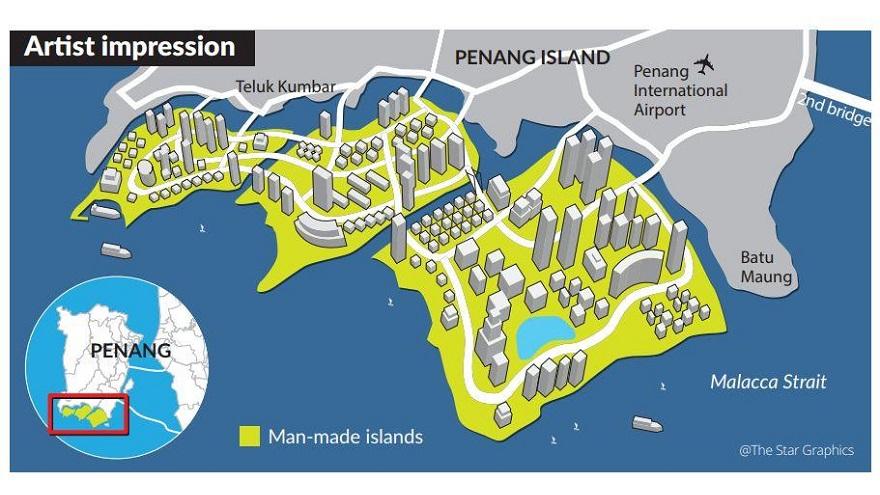 
Over RM70bil is expected to be raised from the three man-made islands under the Penang South Reclamation Scheme (PSR), enough to spearhead the state's economic development for the next 30 years.

Sources told The Star that out of the more than RM70bil, about RM46bil would be used for the construction of the RM9bil light rail transit (LRT) line, the RM9.6bil Pan Island Link 1 (PIL 1), and other supporting infrastructure projects under the Penang Transport Master Plan (PTMP).

According to a prominent Penang developer, the present price of industrial land on the current Penang island would be around RM70-RM200psf, depen­ding on its status as leasehold or freehold land.

"When the reclamation of the islands starts in 2020, there could be at a 10% appreciation. The island will be sold via an open tender process," he said.

It will take at least six years for the reclamation, which will be done in stages, to be completed.

It was previously reported that sources had said that about 75% of the three islands were for sale, with some 30% of the enquiries received so far being for industrial land.

When contacted, a local manufacturing company said it would be interested to bid for the lots once an open tender was called.

"There's currently a slowdown in the manufacturing sector. When the reclamation is done, the global economy should also see a recovery," said its spokesman.

The National Physical Planning Council is expected to approve the reclamation of the three islands, totalling 1,821ha (4,500acres), before the end of this month.

The SRS Consortium - a 60:20:20 joint venture involving Gamuda Bhd, Loh Phoy Yen Holdings Sdn Bhd and Ideal Property Develop­ment Sdn Bhd - is the project delivery partner, appointed by the state government to oversee the implementation of the LRT, PIL 1 and PSR scheme, components of the PTMP.

It was also earlier reported that the tender to reclaim the island would be out in the third quarter of this year.

Island A will house industrial projects - which lots will be developed for sale to foreign and local investors to generate funds for PTMP - and residential development, while Island B will accommodate the state administrative offices and commercial properties.

Residential properties will be developed on Island C.

The LRT is an integrated transport solution comprising a monorail link, cable cars and water taxis to solve traffic congestion in Penang while the 19.5km PIL highway project connects Gurney Drive to the Penang International Airport.

The LRT begins from Komtar in the northeast corner of the island and passes through Jelutong, Gelu­gor, Bayan Lepas and the airport before ending at Island B.