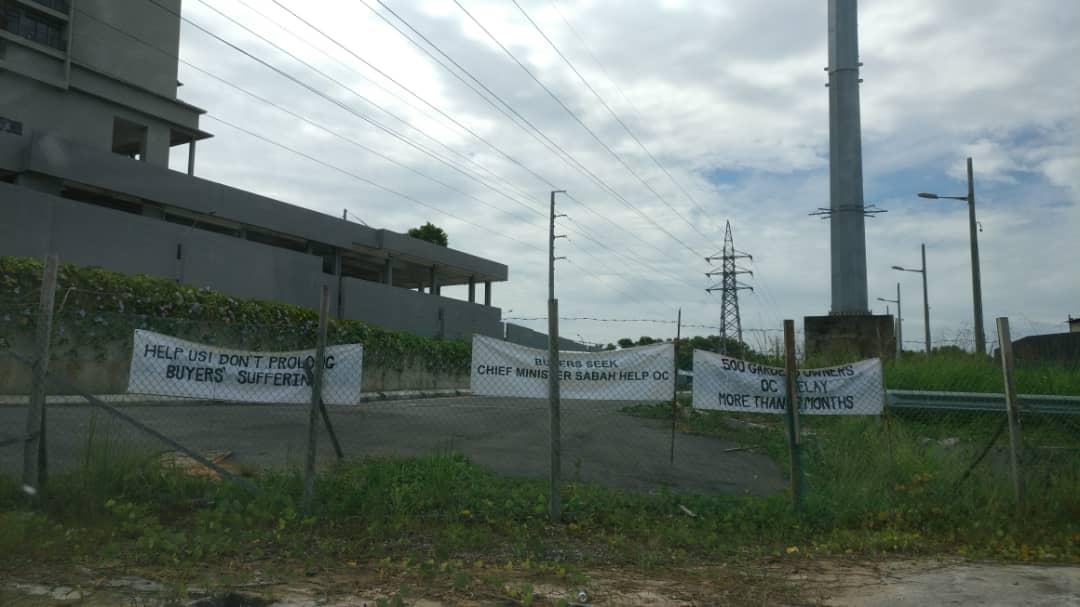 Some 500 homebuyers of the Gardens @ Bundusan have suffered long over the delay obtaining their Occupation Certificate (OC). Gathering at the residences' lobby on Tuesday, 12 June, the homebuyers are urging Chief Minister, YAB Datuk Seri Panglima Haji Mohd. Shafie Bin Haji Apdal and the member of Parliament for Penampang, YB Darell Leiking to look into the plight and injustice suffered by the homebuyers of the project.

Speaking to the members of the media on Tuesday, a representative for the residents said they are merely seeking for the Government's intervention on the prolonged OC matter which has caused such a distress.

Marvelgold Development Sdn Bhd, developer of the Gardens Condominium, claimed that development and construction of the residential project was done in accordance with approved development plans, duly approved by all the relevant local and State authorities, including Lands and Survey Department, JKR, Penampang District Council, Town and Country Planning Department and the Local Government - particularly the housing department and the Housing Controller.

"Without such approved plans, construction would not take place. The developer's architect had issued the Certificate of Practical Completion (CPC) upon completion and OC was applied in November 2016" said Mr Eppe Charles Constantine, a spokesperson for the residents.

There were however, disputes over the road access leading to the residential project. The homebuyers are urging the Housing Controller and Penampang District Council to sit with them to discuss amicably on the road matters.

"We hope that the new District Officer of Penampang can expedite the procedures of obtaining OC. We understand there are protocols and procedures and we will abide by the law, but 500 of us have been waiting for than 18 months already" he shared.

"Some of us have emptied our savings to buy the condominium as our home for our children. We have borrowed loans from banks, paid instalments and interest to banks and we cannot move into our units for the past 18 months" he added.

The buyers are urging Marvelgold Development to cooperate with DBKK in fulfilling the requirements in ensuring the road completion within the stipulated time, should the requirement of obtaining the OC is to be through Taman Mahkota.

"In the meantime, we would like to suggest that the developer's appointed architect amend the Development Plan to include Taman Formosa Road Reserve as access in order to get temporary road access to obtain the OC" he said, adding the both roads may be utilized to ease the anticipated traffic congestion in the future.

It is also reported that the buyers have shared their grievances previously, but no action was taken. Fearing that they will be in danger of defaulting on their bank loans or going bankrupt, the buyers are seeking for the new Government's help and support.