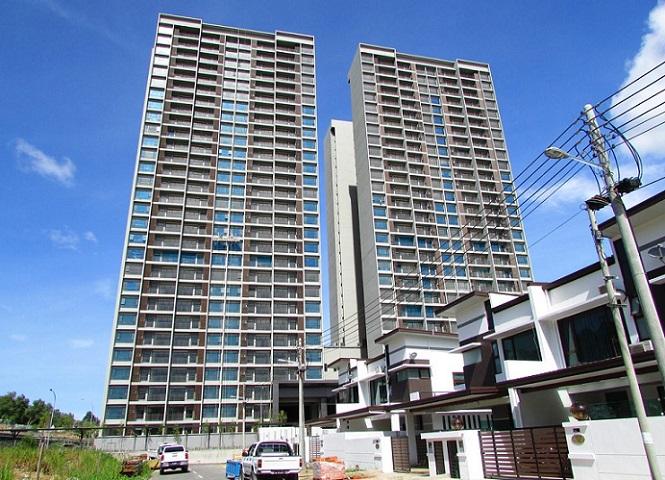 
The Gardens at Bundusan is a tastefully done residential development project undertaken by the SCLand Group. Located within the district of Penampang, it is strategically placed where commercial centres such as the Beverly Hills and Damai Centre, the Road Transport Department's Headquarters, and landmarks such as the Sabah Golf and Country are within easy reach of its residents.

With a promise of a comfortable living standard, buyers had flocked to be part of the Gardens' community. But it has been nothing but â€˜headache and heartache' for the purchasers of the condominiums once SCland, the developer, completed its construction last April 2017.

Despite having complied with all the local authority's requirements prior to the commencement of the project and at the completion of the same, the Penampang District Council has yet to release the developer's application for the Occupancy Certificate (OC).

The PDC is insisting that SCLand seek the consent on the usage of the road reserve from the developer of the adjoining land even though the reserve road, situated at Jalan Farmosa B, is a common road reserve adjoining the Garden's Bundusan.

A dialogue between SCLand and the property buyers concerning PDC's delay on the OC ended in a stalemate.

With no solution in sight, several buyers of the condominiums reached out to Pritchard Gumbaris, Parti Warisan Sabah's Kapayan divisional chief to pour out their grievances.

When asked, Pritchard had this to say: "The issue of SCLand, seeking consent from the adjoining land developer should not materialise as it clearly shows that the road leading to the Gardens, Jalan Farmosa B, had been gazetted as a road reserve.

"Rationally, the OC should be issued out as SCLand has fulfilled all requirements. Why only now, a last minute complication to both the developer and the buyers? The PDC should really look at the process to ensure no heartache to the buyers.

"It is obvious that this is an administrative matter as a previous developer had already committed, and should have surrendered (to PDC) the common road reserve adjoining to the Gardens' Bundusan several years ago when they had completed their own development.â€

Darell Leiking, the Penampang Member of Parliament when commenting on the Gardens dilemma, said, "The issue of the OC should be taken seriously by both the developer and more so, the PDC, its Chairperson and the PDC Executive Officer.

"The PDC should be responsible and must act swiftly to resolve this mess as how could they have first approved a development such as the Gardens'when the question of the adjoining Road Reserve by a previous developer leading to the entrance of the new property has an issue or dispute which is unresolved.â€

Leiking said he would like to know how the PDC would explain this situation, as per usual practice, all Road Reserves pursuant to a development would be surrendered to the Council upon completion of any Development.

He added: "I sincerely feel for the buyers as quite a number are now servicing their bank loans but are unable to move into their units. They also have to pay (rentals) for their existing houses.

"The PDC and the DO Penampang should strive to find the quickest way to end this quagmire now especially since we understand that the SCLand had complied with its Development requirements. Mind you that the substantial amounts of money involved are quite exorbitant for the Buyers as well as the potential rating payment losses for the PDC.â€

Leiking said the PDC should relook at the whole approval process and where it had gone wrong, and how to expedite the issuance of the OC, stressing that the longer the stalemate goes on, it would be a potential loss for Penampang, and could deter further development in the district.