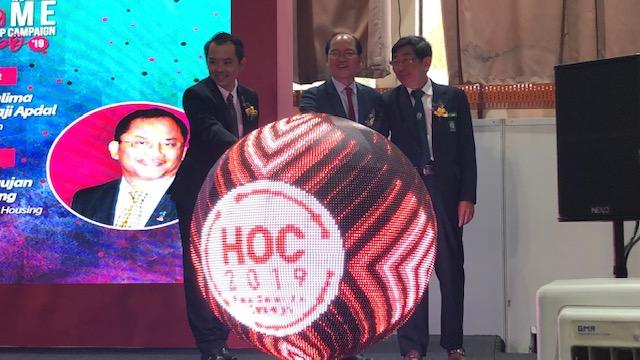 
Property Hunter and the Sabah Housing and Real Estate Developers Association (SHAREDA) kicks off the Home Ownership Campaign Expo 2019 at Dewan Foo Chow. The expo will run from 1 to 3 March 2019, featuring more than 30 developers with myriad properties for homebuyers to choose from.

The launching of the expo was officiated by Sabah Deputy Chief Minister, YB Datuk Seri Panglima Wilfred Madius Tangau who in his speech commended the efforts of SHAREDA for taking up the responsibility to organize the Sabah sector of the campaign.

"Real estate developers play no small role in our economy. I hope that in your own way you will also play your role in drawing in investments and highlighting innovation because the Sabah government needs you," he said.

SHAREDA President, Chew Sang Hai in his speech says that SHAREDA members are thankful that the federal and state government has embraced the campaign, saying, "SHAREDA, together with REHDA and SHEDA have taken a proactive approach to vitalize the real estate industry by proposing to the government to reintroduce the National Home Ownership Campaign (HOC), which was first promoted in 1998."

The Home Ownership Campaign Expo 2019 coincides with the launching of the National Home Ownership Campaign in Kuala Lumpur, which was livestreamed in Sabah at the expo. Both events were successfully launched simultaneously. The HOC is a government initiative that runs from 1 January to 30 June, aiming to encourage the public to buy a home during the campaign period by offering free stamp duty on the Memorandum of Transfer (MOT) on all new residential properties by developers registered under SHAREDA, REHDA and SHEDA, and 10% discounts on property.

Be sure to visit the Home Ownership Campaign Expo 2019 at Dewan Foo Chow, happening this weekend, 1-3 March 2019. Get a new home with exclusive stamp duty exemptions and discounts today!