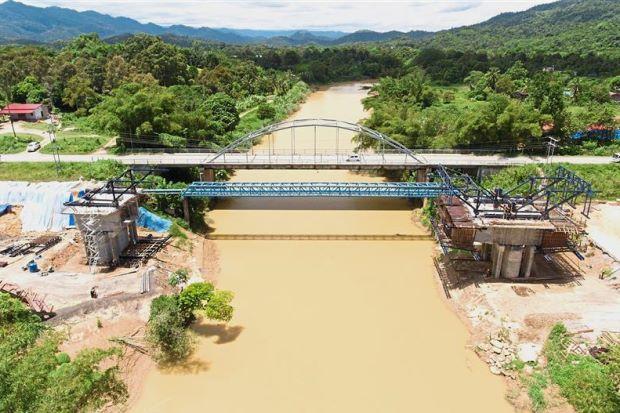 A new 150-metre bridge crossing Sungai Papar in Kampung Simpudu, is the first one completed under the Sabah Pan Borneo Highway Project and was opened to the public last month.
The bridge, built under Work Package 5 (Papar-Donggongon), is one of 26 to be built throughout the state under the project.

Construction began in August 2016 and was completed in July this year.

Borneo Highway PDP Sdn Bhd (BHP) acting chief executive officer Muhammad Fadzil Abdul Hamid said at present the new bridge was being utilised as a dual carriageway, pending the construction of another bridge adjacent to it to replace the Datuk Salleh Sulong Bridge.

“Works to demolish the old bridge (Datuk Salleh Sulong Bridge) commenced last month. The 42-year-old iron bridge was officiated by the then minister of communications and works, Lim Guan Sing (now a Datuk) on October 7, 1976.

“It was named the Datuk Salleh Sulong Bridge in conjunction with the name of Papar's elected representative who was also the state's Finance Minister killed in a plane crash on June 6, 1976,” Muhammad Fadzil told reporters during the media's tour of the bridge here today.

According to Muhammad Fadzil, the construction the bridge to replace the Datuk Salleh Sulong Bridge will begin in January next year after and expected to be completed by March 2020.

On the completion rate of the 11.7-kilometre Work Package 5 (Papar-Donggongon), he said it was now at 43 per cent and expected to be fully built by March 2020.

He said the project was slightly behind schedule, and among the factors which led to the delay was the land acquisition process which needed to be done well and prudently, as it involved residential land.

Muhmmad Fadzil also said that of the 35 work packages under the project, 12 packages were currently being implemented involving about 2,500 employees including BHP staff, contractors, consultants, and suppliers.