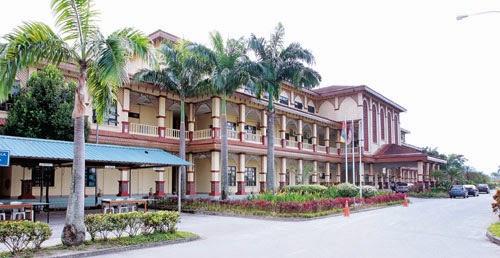 LABUAN: One of Labuan's most significant historic buildings, Kompleks Darul Kifayah, has finally been completed after some delay. The RM26 million long-awaited landmark, which is richly decorated with Arabic calligraphy and inlays of semiprecious stones, was fully completed on Jan 2 and is set to transform the island's landscape.

The Islamic architecture complex owned by Federal Territories Islamic Religious Council (MAIWP) Labuan at Jalan Tanjung Purun, here, employed a host of new technologies, techniques and other features that differentiated it from other government administrative buildings.

"The complex is attached with religious primary and secondary schools with hostel, multipurpose hall, food theatre, administration-own building, surau and staff quarters, and the location is far from the hustle and bustle of town," he told reporters.

He said the new intake of 64 students in addition to the 250 senior students (from SM Agama MAIWP) enrolled on Jan 2, and were from Labuan, Sabah and Sarawak.

Fatah said the complex included amenities such as common areas for meetings and other community events.

The construction of the complex underwent numerous studies to accommodate a trend for more open, common areas where students could congregate before school or during lunch.

"It doesn't prevent students from gathering in groups, but makes it easier for administrators to control untoward incidents and other potential disciplinary problems," he said.

"For example, subjects that complement each other are often grouped in the same wing of the facility; classrooms are located in 'schools' within the school, this allows teachers to collaborate on lesson plans more easily," he added.