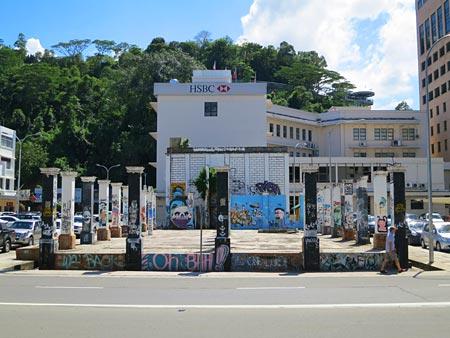 Kapayan assemblyman Dr Edwin Bosi has urged the government to consider converting the burnt old building next to the HSBC and Chartered Bank building into a Chinese museum.

"If I am not mistaken, the building used to be the office of the Social Welfare department. I believe this is the most appropriate thing to do since it will remove the eyesore structure and add another tourist attraction in Kota Kinabalu. I would also like to recommend to the government to retain the original architectural design of the old building for the Chinese museum, should it materialize" he said.

Bosi, who is Parti Anak Negeri Penampang chief, said he had raised this matter of having a museum for the Sabah Chinese in the Sabah State Assembly.

"I remember telling the august House that the history of the Chinese community in Sabah will help our younger generation understand the origin of the Chinese of Sabah" he said.

Bosi said he remembered very vividly the Chinese women with a black dress and big round hat peddling their food and drinks at the Papar train stations.

"My favourite was the hard-boiled eggs with thick soya sauce. Suddenly, they seem to have disappeared into thin air. I have also read a book where there was a strong Chinese presence in Tawau working in the coal mine at Silimpompon, Kalabakan" he recalled.

According to Bosi, he came to know a little of the origin of the Chinese in Sabah through a brief narration by Chinese friends during a simple ceremony to embrace the Chinese community at Kampung Tinangol, Matunggong early this year by Parti Anak Negeri. The ceremony included a simple ritual of sharing a bun or â€˜pau'. According to them, the Chinese first came to Sabah via Kudat.

A museum for the Sabah Chinese community will go a long way towards recognizing them for their contributions to the development and wellbeing of Sabah.

"I am sure the museum will be a big hit among Malaysians, especially Sabahans, and the thousands of visitors from all over the world, especially from China and Taiwan" he said.

Bosi also said that there were many mixed marriages in Sabah and the word â€˜sino-native' was common.

"Our Chinese and sino-native children in Sabah may use this museum as one of the ways to trace their ancestry in China or Taiwan.

"There have been some arguments whether the Kadazans, Dusuns and Muruts are from China or Taiwan because of some close resemblance in the culture, especially in the costume. I saw this in Taiwan when I visited a museum for the indigenous people of the island.

"I understand there are researches being done on this but are not well publicised. I hope the local universities will do more research on the origin of the Momogun people. It will be interesting to know if the indigenous people in Sabah do have DNA connection with the people in China or Taiwan" he added.