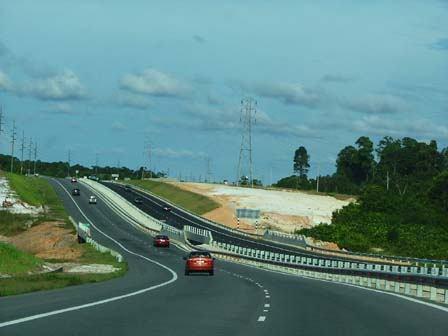 Pan Borneo Highway Development a Cause in Recent Floods

Government agencies in Papar have held a meeting to discuss measures in preventing future floods from affecting areas surrounding the Pan Borneo Highway.

Deputy Works Minister, Datuk Rosnah Abdul Rashid Shirlin admitted that there are a few areas affected by the recent floods due to the ongoing construction works, and discussion had been carried out regarding future precautions.

"As soon as the report is completed, it will be delivered to all parties concerned including the project delivery partner (PDP) itself" she said following reports on the development and construction works of Pan Borneo being the cause of the recent flash floods in the surrounding areas.

Rosnah who is also Papar Member of Parliament stated that housing areas such as Taman Saujana in Langkuas had also been affected and they are making sure that prevention measures are taken to decrease or eliminate the issue from recurring.

"I was informed that a few housing areas have always experienced floods and this is due to the poor drainage system apart from construction works in the surrounding areas but I believe the PDP and contractors are responsible people.

"I am sure there will be continuous discussions and efforts made to ensure that actions are taken" she affirmed.