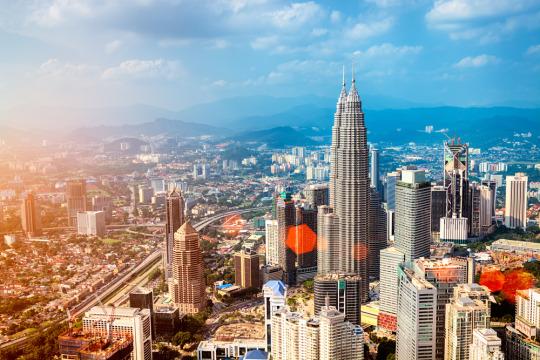 
- Singapore retains its top position on the index, followed by the United Arab Emirates and New Zealand - Malaysia is the only other Southeast Asian country within the top 10 - Thailand and Philippines moved up five and six places on the index to 26th and 44th place respectively, due to better infrastructure development and institutional effectiveness metrics - Cambodia moved up two places on improved market accessibility metrics

Knight Frank, the independent global property consultancy, has launched the second edition of New Frontiers: Prospects for Real Estate Along the Belt and Road Initiative, aimed at helping investors and occupiers understand potential opportunities that China's Belt and Road Initiative (BRI) can generate beyond its borders. Chinese entities have more than tripled their investments into Southeast Asia's transport, real estate and logistics sectors, from US$17.1 billion between 2009 and 2013 to US$59.25 billion from 2014 to 2018.

Bolstered by investments under the BRI banner, interest from cross-border real estate investors to Southeast Asia's industrial sector increased in tandem, from US$330 million between 2009 and 2015 to a peak of US$1.4 billion in 2017 - 72% market share of total industrial investments - the report states.

In 2018, cross-border industrial investment was US$805 million, 40% higher than the annual average of US$570 million over the past five years, while in the first quarter of 2019, cross-border investments topped US$480 million and is expected to exceed volumes last year.

Nicholas Holt, Head of Research, Knight Frank Asia Pacific said, "The Belt and Road Initiative (BRI) is having an impact on the industrial and logistics sector in Southeast Asia, as new infrastructure fuels growth prospects across the sectors. With increasing demand from domestic and international occupiers, rental growth has strengthened in most markets, which in turn has attracted cross-border investors. These large volumes of capital investment have driven both rapid development and gentrification of older stock."

Malaysia has been a major beneficiary of Chinese capital with investment totalling US$43.8 billion over the past 10 years. Commenting on the impact of The Belt and Road Initiative (BRI) in Malaysia, Allan Sim, Executive Director of Capital Markets at Knight Frank Malaysia said, "Following the change of government in May 2018, a number of Chinese investments and projects, especially mega infrastructure projects had been deferred. However, the attendance of Prime Minister Tun Dr Mahathir and Malaysian business delegates at the recently concluded second Belt and Road Initiative Forum for International Cooperation, coupled with his intention to expedite the setting up of a one-stop centre (OSC) to ease foreign investment related approvals, bring assurance and confidence to Chinese firms to reconsider investing in Malaysia. Furthermore, with the new agreements for the revival of the ECRL and Bandar Malaysia, Chinese firms will certainly be looking more seriously at Malaysia again and the industrial segment will benefit the most.

"In particular, we expect more high-tech manufacturers from China to operate in Malaysia taking advantage of Malaysia's adequate supply of raw materials, coupled with relatively lower operating costs in running businesses. Moreover, Chinese firms can utilise Malaysia as a manufacturing hub as products manufactured in this nation are insulated from tariffs from most major economies, such as the likes of the United States, Latin America and The European Union."

In line with Johor's improved infrastructure, coupled with a planned upgrade of port facilities within Johor, the industrial and logistics sector in Johor is attracting a high level of interest among the investors. The current market rents for factories/warehouses within Johor range from RM0.80 to RM1.50 per square foot per month, which is on par with the major industrial zone in Selangor.

Debbie Choy, Branch Head at Knight Frank Johor said, "Good air and maritime connectivity in Johor, provided by established infrastructure in the state, namely the Senai International Airport as well as the Johor Port and the Port of Tanjung Pelepas, have supported the state's vibrant logistics industry.

"Johor has always been an attractive destination among Chinese investors. In fact, China is among the largest investor in Iskandar Malaysia since its inception in 2006, especially in the manufacturing sector. Moving forward, Johor is well positioned to capitalise on the continuing strong bilateral relations between China and Malaysia."