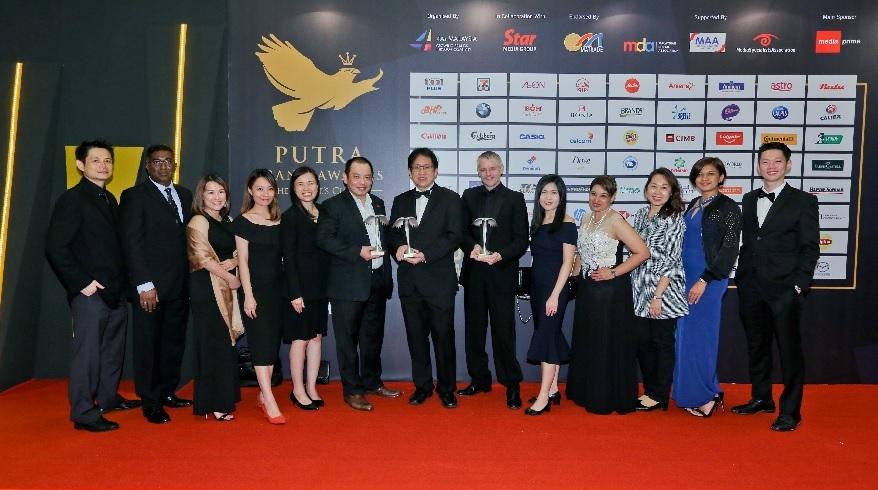 Sunway scores a hat-trick for the second time in 2018, picking up best brand in Property, Education and Entertainment at the Putra Brands Awards 2018, after being named Best Employers at the Aon Best Employers Award 2018. . It was an extraordinary year for Sunway Group (Sunway) as it scored its second hat-trick at the Putra Brand Awards 2018 held at the Majestic KL last Friday.

The Putra Brand Awards is one of the most prestigious brand recognitions in the country and is deemed as the closest reflection of consumer brand affinity. This year, the awards celebrated its largest brand research sample, conducting more than 7,000 interviews through an advanced global online research methodology.

Sunway Group Deputy Chairman, Tan Sri Datuk Seri Razman Hashim said, "We are very delighted to know that consumers out there voted for our brand. We are very thankful for the confidence and trust of the public as well as our dedicated 16,000 team who had contributed greatly in making Sunway the reputable brand it is today."

Sunway Property has built, and now owns and operates the award-winning townships and developments of Sunway City, Sunway City Ipoh, Sunway Iskandar, Sunway Damansara, Sunway Velocity and is currently building Sunway Valley City in Penang. The "master community developer" is one of the most well-reputed developers in Malaysia having won multiple Federation Internationale des Administrateurs de Bien-Conselis Immobiliers (FIABCI) awards and has been recognised by the Building and Construction Authority Singapore and Green Building Index for its sustainable practices. Sunway Property has been awarded in the Putra Brand Awards for seven consecutive years.

Sunway University is a leading university, and is owned and governed by the largest social enterprise for education in Malaysia, the not-for-profit Jeffrey Cheah Foundation. The education institute has consistently achieved an excellent rating (Tier 5) in the Malaysian Qualifications Agency (MQA) Rating System for Institutions of Higher Learning (SETARA) in 2009, 2011 and 2013. Sunway University has been ranked five-star by QS World and No.1 in Asia for the categories of teaching, employability and facilities. This year is the fourth time Sunway Education Group is recognised at the Putra Brand Awards.