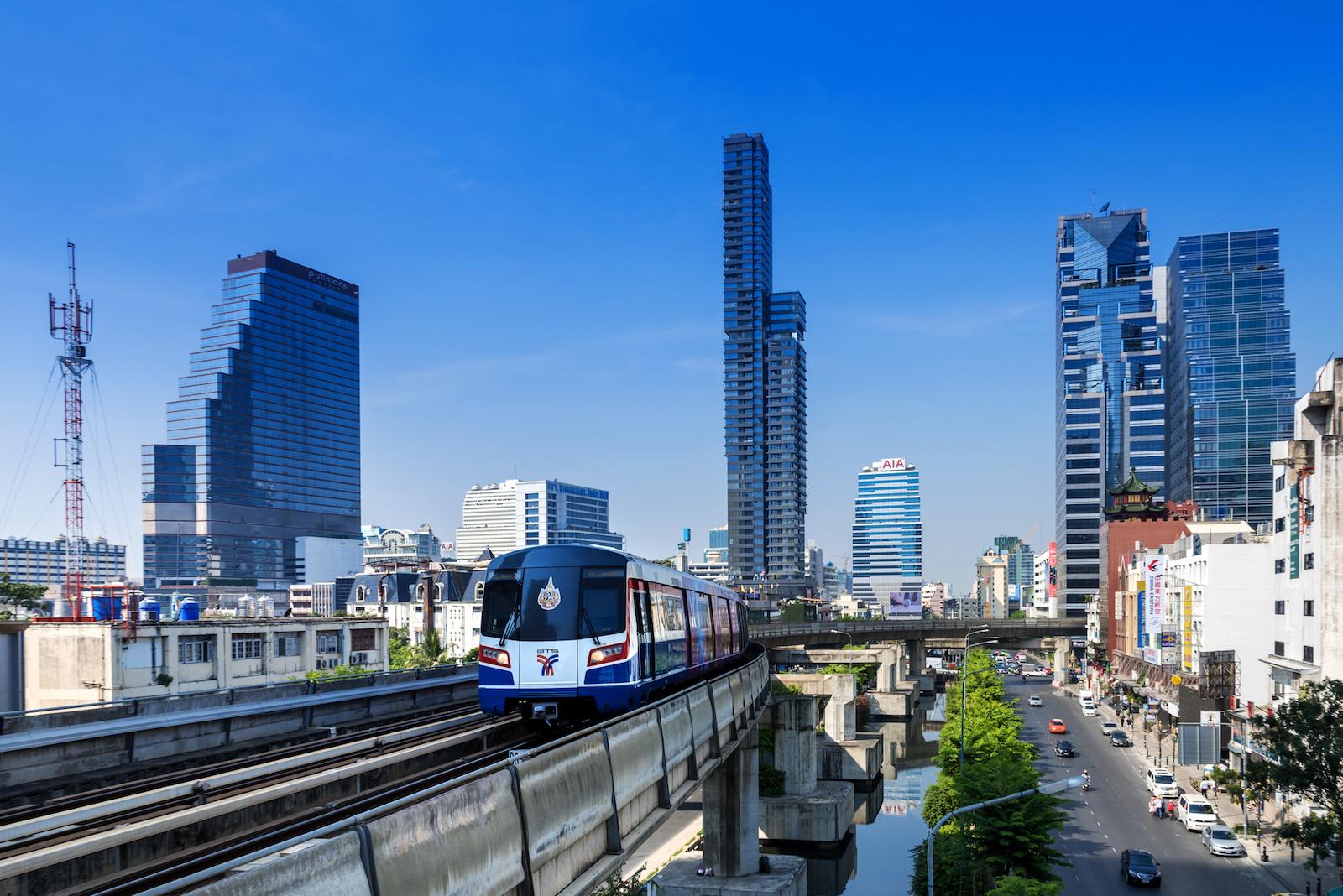 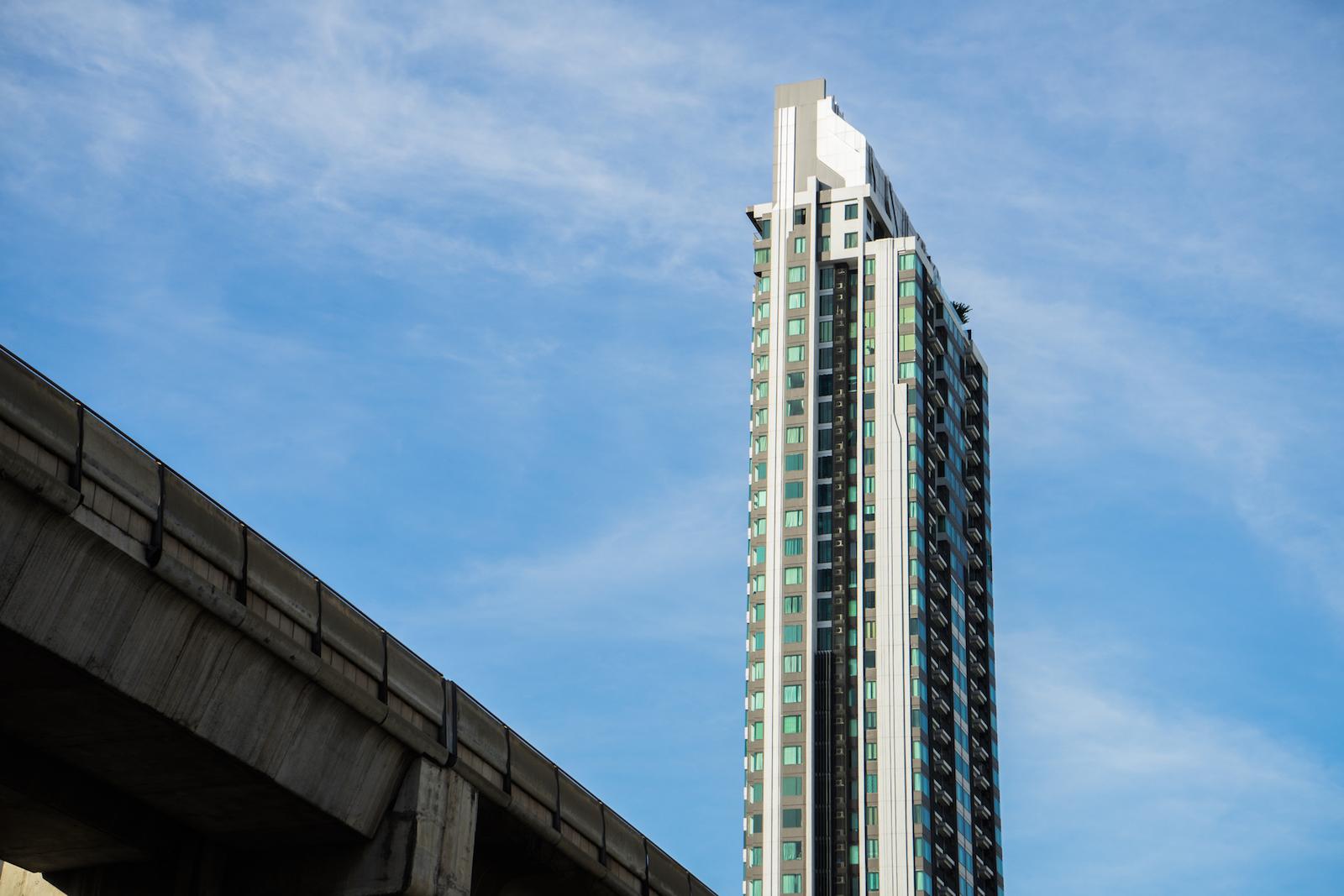 In 1999, the 23.5-kilometer overhead Skytrain opened in Bangkok, providing the traffic-clogged capital with its first mass transit rail system. But it took about a decade for the new transport system to really take off among commuters - and thereafter among property developers. Now, there are worries that the mass transit system has become a bit too successful as a property stimulus as new developments mushroom along the line across the city and in its outskirts.

"When it was under construction many luxury department stores and five-star hotels didn't want a Skytrain station to be built near them because they thought the train would attract too much riffraff" recalled Simon Landy, former executive chairman of Colliers (Thailand), an international property consultant.

The "ramp upâ€ in ridership was a lot slower than anticipated by the Skytrain's investor, BTS Group Holdings PLC. During the first year of operation in 2000, it had less than 150,000 passengers per day. That figure had grown to about 400,000 per day by 2010.

Nowadays, there are at least 750,000 passengers a day on the Skytrain, which can be packed to almost Tokyo-like push-and-shove levels during the rush hours.

Mixed-use luxury hotels and upscale department stores have sprouted up or are under construction near most centrally located stations and land prices along the track in Bangkok's central business district (CBD) have soared 1,000% between 1998 to 2017, according to CBRE Thailand, an international property agency.

The number of condominiums in Bangkok has grown from 2,600 units in 1998 to 630,000 units now, with the majority following along mass transit tracks, CBRE data show. The condominium building boom took off after 2004, shortly after the government's Mass Rapid Transit Authority (MRTA) launched the Blue Line, known as the MRT, which added an additional 21 kilometres of subway rails to the urban network.

While Bangkok's sprawl was spreading further outwards into the suburbs between the 1980s and 1990s, over the past two decades the mass transit system has "anchored the city centreâ€ around the downtown and midtown mass transit stations, she said.

And future growth, at least in the condominium segment, is sticking close to the extensions of the mass transit rails outside the CBD. "We are tracking 110,175 units of under-construction condominium supply in midtown and suburban locations, of which 28% are more than 800 meters from a mass-transit system, while 72% are located within 800 meters of mass stations" Aliwassa said.

Of course, mass transit systems are not the only factor driving Bangkok's condominium boom. "Other factors that impact the growth of the condominium market include growing urbanization, the trend away from extended to nuclear families, rising disposable incomes, higher availability of mortgages and foreign buyers" she said.

While foreign buyers are a growing factor, Thais themselves have proven the main market for the initial phase of the condominium boom, which has accompanied changes in urban lifestyles, rising incomes and a trend away from suburban housing developments to city condominiums, real estate agents say.

But this market is showing signs of "fragility" according to the Bank of Thailand (BOT), the central bank, which recently warned of a higher ratio of new mortgages with loan-to-value rates of 90%.

"We have seen certain banks, particularly the mid-sized banks, that have been a bit more aggressive in providing credit to home buyers in certain segments, and that's led to a high loan-to-value ratio and we've seen rising NPLs (non-performing loans) coming from certain segments" said BOT Governor Veerathai Santiprabhob. "There could be segments of the home market that need to be watched more carefully" he said.

After three years of fairly slow economic growth in Thailand, the number of unsold condominium units in Bangkok rose to more than 30,000 last year, mostly in the medium price range, between 100,000 to 200,000 baht (US$3,012 to US$6,024) per square meter. Prospects for sales have improved somewhat this year, with the gross domestic product is expected to grow more than 4%.

With the medium-price condominium market somewhat sated, some of the bigger property developers started to invest in "super luxuryâ€ condominiums a few years ago. Now there may be too many of those high-end units on the market.

As such, developers have started to look abroad for sales. Sansiri PCL, which has a wide range of condominium blocks in Bangkok ranging from medium priced to super luxury - including units at its 98 Wireless Building that are going for 700,000 baht (US$21,084) per square meter, has been targeting the wider Asian market.

"Both Hong Kong and mainland China are our key customers" Poomipak said. "The company is expecting significant growth of 25% in international sales in 2018, compared with 2017, with the Hong Kong and China markets contributing about 70% of that, about 35% each.â€

Sansiri has targeted sales of 45 billion baht (US$1.4 billion) this year, up 14% year-on-year, with an estimated 13 billion baht (US$392 million) expected to come from foreign sales, he said.

One reason condominium developers have gone for the super luxury market is that land prices in Bangkok's CBD have soared over the past three years, a reflection in part of the growing scarcity of available space. This scarcity may be the factor that prevents a glut in the segment, analysts say.

"Even if a developer has the financial means to build such a project, finding the right location to do so is becoming ever more challenging as most of the prime locations have already been bought up recently and are under development" CBRE's Aliwassa said.

To finance such projects, many developers have turned to Thailand's bond market, which like the stock market has been hit by capital outflows in recent months due to higher interest rates offered in the United States.

Fitch Ratings Thailand Ltd has estimated that bonds issued by property firms amounted to 425 billion baht (US$13.6 billion) over the past five years, growing 20% annually. The credit rating agency urged bond buyers to be selective about the properties they backed, noting a wide range in risk depending on the projects and market segments.

Like central bank governor Veerathai, Charl cautions that Bangkok's property market has many segments, some of which are more worrisome than others.

"Unless we are having a major economic downturn or experiencing sharp increases in interest rates, I think it will be difficult to generalize the situation across projects and companies" Charl said. "Some may be doing better than others.â€