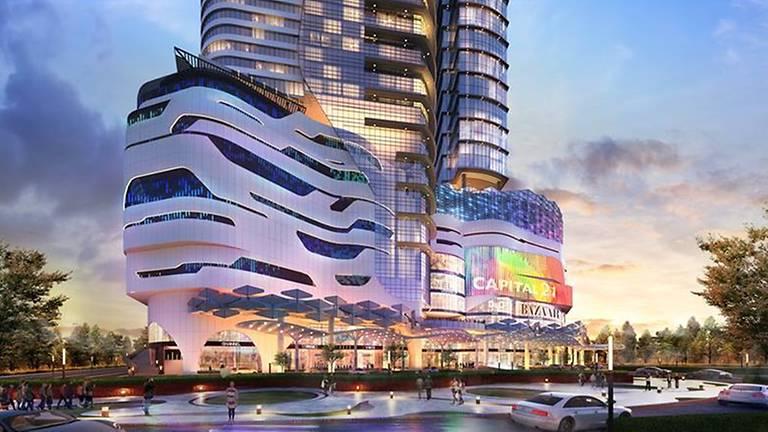 
The Capital 21 entertainment mall built with an indoor theme park at Tampoi, Johor Baru (JB) is set to open by August this year, the project's developers said on Saturday (Jan 13). The 1.2 million sq ft building will include MCM Studio, touted as "the largest indoor theme park in Southeast Asiaâ€ and a shopping complex.

Speaking on the sidelines of the theme park's concept launch on Saturday evening, executive director for Capital World Siow Chien Fu told Channel NewsAsia that the mall, together with the theme park, will be fully ready by August.

MCM Studio, which is also the fifth largest indoor theme park in the world, will take up the entire third and fourth levels of the mall. It will feature three main sections - Movie Planet, Cartoon Planet and Music Planet.

Movie Planet will encompass thrilling rides such as Transformers, Dinosaur World and Haunted House while Cartoon Planet, which targets children, will showcase "kiddy attractionsâ€ such as Tom and Jerry as well as other animated characters.

"The rides are all customised for our visitors. They will be running away from dinosaurs and battling robots, all while in our new park" Mr Siow said.

Meanwhile, the park's third section, Music Planet, will also showcase circus as well as musical and theatrical performances by "internationally renowned namesâ€ such as the Great British Circus.

MCM said that there would be daily circus performances in a tent built within the theme park.

"Outdoor circuses are not convenient, especially when the field where these tents are placed at is muddy. We want to make attending circuses a comfortable experience for all" said Mr Siow.

Besides the theme park, the mall also has three floors of retail, encompassing thematic zones. The zones will features elements from five different continents: America, Europe, Australia, Asia and the Middle East.

For instance, the different floors have giant windmills, the Leaning Tower of Pisa and bright Japanese lanterns to indicate which zone they belong to.

Capital City has not disclosed the name of the retailers at Capital 21 mall but Channel NewsAsia understands that 80 percent of the retail space has been taken up.

When asked how Capital 21 mall can stand out from recently mega shopping centres launched at Johor Baru such as IKEA and Paradigm Mall, Mr Siow maintained that entertainment is its comparative advantage.

"We have to appeal to the modern shopper. With the rise of online shopping and e-commerce, we changed strategy many years ago. Our competitors mostly have one component - but we have many," he said.

"Our theme park is the major attraction for this project, supported by the shopping centre. The rest are purely shopping centres with similar retailers. What we have done is totally different," he said.

Also in the pipeline within the same development are two hotels - Hilton Garden Inn and the theme park's very own Planet Hotel. The hotels will be built from the ground floor and Channel NewsAsia understands that they will open in 2019.

Serviced apartments encompassing 690 units are also currently being built on towers on top of the current building. Despite nagging fears of oversupply in the real estate market in Johor Baru, Mr Siow stressed that he was confident that the apartments at Capital City will be occupied.

"We only have 690 units and moreover, we are confident there is a demand in the Tampoi area," he said.

"There are many locals who would want to stay beside our mall and amenities," he said.

Mr Siow added that there will be many staff working in the mall from overseas and they may stay at the serviced apartments too. The Capital City development is a 20-minute drive away from the Woodlands Causeway and Mr Siow added that he was confident it would appeal to Singaporeans.

Mr Siow stressed that despite competition from Universal Studios Singapore, Singaporeans would still brave the jam and visit Capital City.

"We focus on nostalgic elements that many modern theme parks no longer have - like the circus. Singaporeans who still see the charm of the older type of theme park will visit Capital City. We are confident they will," he added.