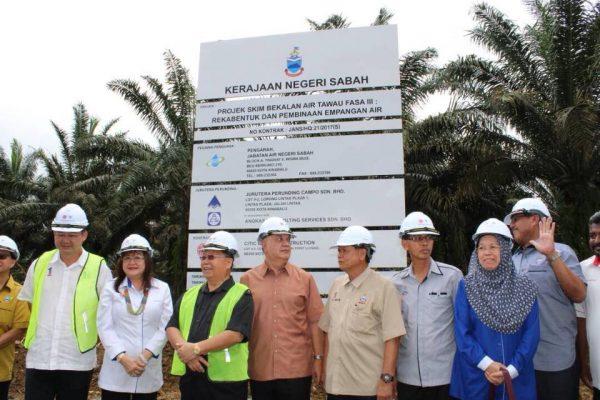 
Tawau residents will receive 209 million litres per day of raw water supply when Phase Three of the Tawau Water Supply Scheme comprising the construction of a multipurpose dam in Jalan Gudang 4 is completed in 2021.

Deputy Chief Minister Tan Sri Joseph Pairin Kitingan said Tawau would be the first district in the state to have a multipurpose dam which could store 30,000 million litres of raw water.

He said the project costing over RM450 million could be a flood-mitigating factor as well, to reduce flooding in the Tawau township and nearby villages with the building of an additional structure that could contain 4.6 million litres of water per day.

"The state government has heard the grouses of Tawau residents and the voice of their elected representatives on the need to build a dam that can consistently supply raw and clean water to the residents" he said after performing the ground-breaking for the dam project on Tuesday, 9 January.

The four-year project was awarded to Citic Wijaya Construction from China on December 26, 2017.

"The state government will strive at making this project a reality" he said, adding that the dam to be built near Taman Bukit Tawau could also spur economic activities like ecotourism in the district.

Pairin, meanwhile, said the water supply problem across Sabah needed to be overcome fast with early, thorough study and planning as the water supply demand should be met not just for the present time but also for future generations.

"Planning for the water supply demand until 2050 has begun and usually, a dam construction project takes up to four or five years, while building a water treatment plant takes up to two to three years" he said.