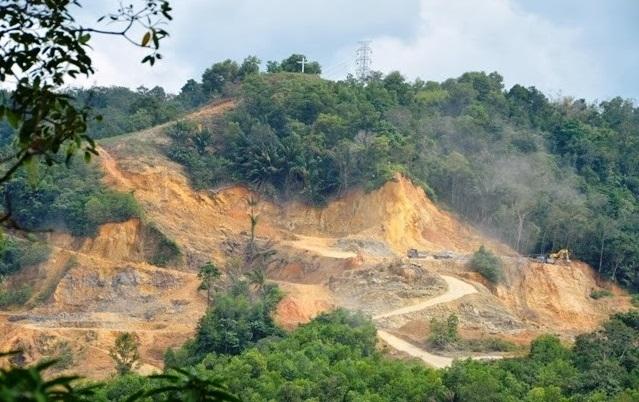 
A class action suit has been filed against a vegetable-cum-duck farm owner at Togudon, here, over what is alleged to be the largest hill cutting in the Moyog River Catchment area that is crucial for water supply to the Babagon dam that serves residents in the city and surrounding areas.

The plaintiffs - Elios @ Randi Payu and three others on behalf of all the residents on the banks of the Moyog as well as residents of Kota Kinabalu - are suing the owner of the farm, Ooi Say Tuan, as first defendant and District Officer of Penampang, Director of Lands and Survey, Director of Environment Protection Department and the State Government as second to fifth Defendants.

In their statement of claim, the first plaintiff as secretary of Tagal Committee, the first people of Sabah had been entrusted with the conservation and protection of the Moyog river and the fish that they actually feed and allow harvesting only once a year. They draw water from the river for daily use, consumption and existence.

The second and third plaintiff operate riverbank tourism and recreational facilities at Kg Mongkusilad for their livelihood from tourists and visitors.

The fourth plaintiff represented the residents of Penampang and Kota Kinabalu who consumed the water drawn from the Moyog every day and any contamination and pollution it contains and that the acts and omissions of the first defendants have directly suffered injury and harm.

The plaintiffs claim the first defendant is the sole controller of the farm situated on Mongkusilad Mountain where the Mongkusilad River flows beneath which then joins the Moyog River.

The first defendant cut the top of the mountain, levelled it and took no step to prevent soil erosion which then flooded the river below with mud.

They are backing up their claim by aerial photographs and videos.

They also claimed that the first defendant intentionally caused excretion of ducks on his land to enter the river below, besides dumping of carcases of ducks into the same river.

There is no other duck farm in Mongkusilad or other areas apart from that owned by first defendant, they said.

They allege that the second to fourth defendants had knowledge of the first defendants' unlawful acts but failed to take reasonable steps to prevent harm to the environment and the plaintiffs.

Hence, the second to fifth defendants are liable to the first to the fourth plaintiffs and those they represent for violations of their constitutional rights under Article 5(1) of the Federal Constitution.

The third plaintiff claim in his own right the loss of livelihood against the first defendant.

The plaintiffs also seek a mandatory injunction directed to the second to fifth defendants to supervise activities of first defendant to restore the Mongkusilad Mountains to original status and clearance of all contamination and pollution of the Moyog River.

The suit was filed by Messrs Colin Lau & Co on behalf of the plaintiffs in September.

Meanwhile, Senior State Counsel of the State Attorney Chambers representing the second to fifth defendants had filed a defence in October with a statement of denials and put the onus of proofs to the plaintiffs