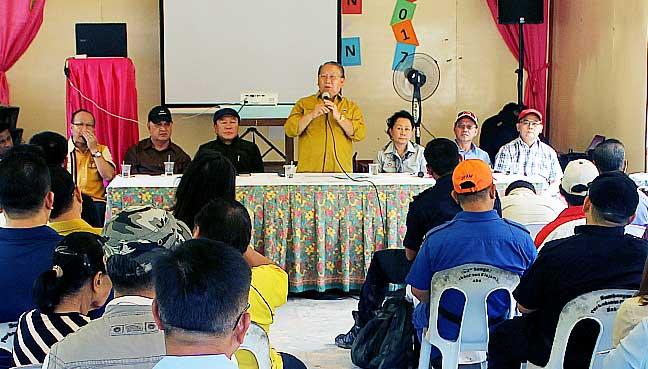 KOTA KINABALU: More than 240 families who are now living within the proposed Kaiduan Dam area will be generously compensated by the Sabah government, said Deputy Chief Minister Joseph Pairin Kitingan.

Pairin, who is also Sabah's infrastructure development minister, said the state agreed that the affected villagers should be given better infrastructure to help them start a new life in their new surroundings.

The state proposed 0.3 acres of residential land for each household, resettlement allowance of RM10,000 per household, payment of "sogitâ€ (customary fines) for burial grounds as well as options to compensate loss of land including crop and buildings.

Speaking to villagers in Kg Terian, Penampang, on Friday 10 November, Pairin said each household would also receive five acres of agricultural land and a RM500 monthly allowance for the next three years.

"The government will provide all these as well as the various infrastructure a village would need, such as school, health clinic, police post, and tarred roads, including access roads to Kg Terian, Kg Buayan and the resettlement area" he said.

He also assured that the settlement would be equipped with electricity, water, telecommunication services, as well as modern sewage, drainage and waste management.

The settlement will also have a church, surau, community hall, sports field, grocery store, cultural centre and a burial ground.

"Do not think only of the present or for the next five years. Think what will happen in 50 years. Where do you want your children to be? In our lives, we need to have plans, hence the development projects" Pairin said in Dusun dialect.

The villages affected are Kg Tiku, Kg Timpayasah and Kg Babagon Laut which are situated deep in the valleys of the Crocker Range, the mountains separating the east coast and west coast of Sabah.

A source told FMT that some of the villagers had approached the Water Department and were satisfied with the facilities in the new settlement. Pairin said the compensation package was "better than what other governments are offeringâ€.

"Many of these people are just eager to sign up because they also want to move nearer to the cities" he said.

The resettlement area is on 1,300 acres of land in Penampang and Papar, with 30 acres reserved for housing while the rest for infrastructure and agricultural land. The current villages are only accessible by 4WD vehicles. The other mode of transportation is by foot, which would take hours.

The Kaiduan Dam will submerge a 5.2 square km area and be able to store as much as 175 million cubic metres of water, ensuring water supply to Kota Kinabalu, Tuaran, Penampang, Putatan and other nearby districts for the next 30 years.

The construction of the dam drew protests from communities living in the affected areas, who feared it would destroy their livelihood and tradition.

Penampang already has one dam, the Babagon Dam, but it is not enough to meet growing demands.

Built during the PBS era, the Babagon Dam cost RM200 million and covered an area of 400 acres.

The villagers relocated at the time were promised 200 acres of land with native reserve titles, but were only given 50 acres which were never gazetted as a village settlement.

The experience caused the current group of affected villagers to demand the government put their promises in black and white.

"I am enticed by the offers obviously. But I want to see the titles, the agreements and they must be in our names" said one villager from Kg Tiku, adding that he was afraid his family would suffer a similar fate as those affected by the Babagon Dam 30 years ago.

Earlier this year, Pairin announced that the project would proceed as scheduled despite protests.