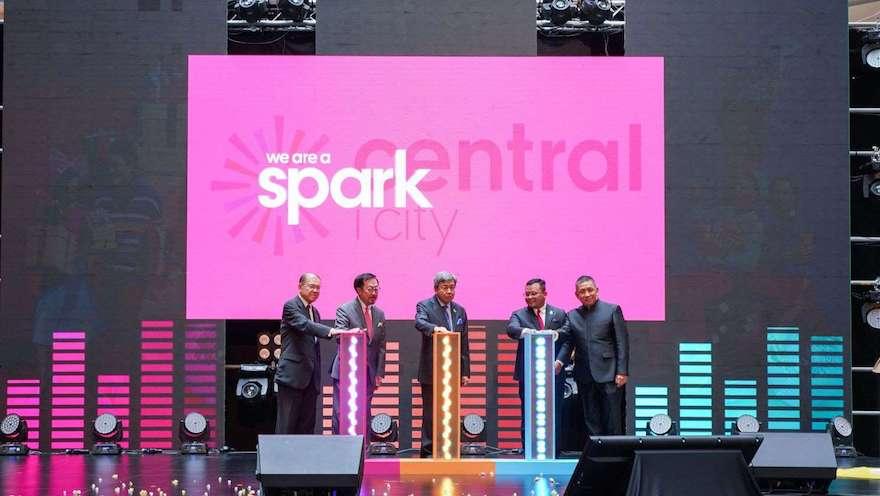 The shopping centre is Central Pattana Public Company Limited (CPN)'s first international project, offering 940,000 square feet of creative retail spaces to serve the people of Klang and Shah Alam. With over 350 retail stores spanning six levels, the shopping centre aims to bring the best of Thailand design, hospitality and retailing experiences to its local customers, partners and tenants. It noted this point of difference will be further strengthened by several exclusive features, among them being;

1. The first Sogo flagship department store outside of Kuala Lumpur. 2. The first Village Grocer supermarket in Malaysia to feature the Royal Thai Project products in store. 3. The largest Samsung Onyx screen in the world, in TGV Cinemas.

Mr Preecha Ekkunagul, President and Chief Executive Officer of CPN's Thailand said, "Our legacy for this project is to create the 'Centre of Life' for the people of Selangor, especially in Klang and Shah Alam. We strive to create a strong sense of community wherever we have a presence and work with local governments, partners and groups to bring economic prosperity that sustainably enriches lives and neighbourhoods."

Preecha added that the company is confident that this lifestyle and shopping destination can play a key role in the longer-term vision of Selangor, boding well with the Chief Minister's recent proclamation of i-City being the 'heart of Selangor's Golden Triangle', a catalyst of future economic growth, innovation and development for the state.

The event was attended by over 500 guests that included His Excellency the Ambassador of Thailand to Malaysia, Narong Sasitorn and a host of high-ranking officials from the Selangor Council of the Royal Court, Selangor State Executive Council, Selangor State Government Secretariat Office, Public Works Department Selangor state government, Shah Alam City Council and Klang Municipal Council as well as corporate figures in the retail and shopping industry.

Anthony Dylan, CPN Malaysia Chief Operating Officer was quoted as saying, "Over 1.6 million residents from the affluent townships of Klang of Shah Alam will now have the exclusive experience offered by Central i-City literally at their doorstep. Designed to meet the demands of highly-urbane communities, Central i-City is proud to offer renowned brands in premium grocery, the iconic fashion, family-focused and youth-oriented entertainment platforms, as well as, community social and entrepreneurial development spaces, on top of a wide selection of cafes and restaurants to suit all wants and needs. Exciting tenants, captivating experiences and socializing opportunities being made available within Central i-City is our recipe to pamper our visitors with inclusivity".

Activities during the grand opening

During the ceremony, guests were treated to specially curated performances from Thailand, performed by Joe Louis Traditional Thai Puppet Theatre and Thailand's Got Talent 2012 winner, Leng Rachanikara. It culminated in a grand musical performance called "The Greatest Spark Show".

The fun continues with "Spark in The City" a special event tie-up to promote culture and art, that was held on 15 June 2019 to 16 June 2019. The special event featured mini components to promote art, music, food and free workshop for families and friends. Only during those two days, shoppers who spent a minimum of RM400 can redeem Central i-City's exclusive "Spark Tumbler".

In conjunction with Central i-City's grand opening celebration, shoppers will be treated to a unique, convenient and complete Thai shopping experience along with special curated events and promotions. Shoppers can experience "Little Chatuchak", an event inspired by one of the world's largest and most famous "Chatuchak Weekend Market". Shoppers can grab the opportunity to taste the intriguing and exotic snacks imported directly from the 'Land of Smiles' by indulging themselves in an exciting Thai snack fair from 15 June 2019 to 30 June 2019.

As a part of the effort to strengthen the diplomatic relations between the two neighbouring countries, the upcoming Malaysia Fest 2019 hosted by the Embassy of Malaysia in Thailand and the Malaysian-Thai Chamber of Commerce, will be held at CPN's shopping centres in Thailand. The Malaysia Fest 2019 will commence at CentralWorld from 20 June 2019 to 23 June 2019 and subsequently at CentralFestival Hatyai from 27 June 2019 to 30 June 2019. The event aims to promote the rich heritage cross-cultures between two countries featuring local cuisine, handicrafts, products and more.