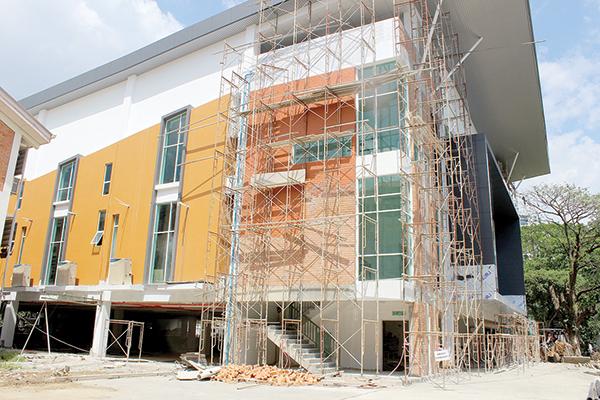 It is learnt that an additional RM3.5 million is needed to completely pay off the total construction cost between now and September when the Occupation Certificate is ready.

"Construction for the project started on July 10, 2017. The building is 90 per cent completed as of March 2019, with 100 per cent completion by May 2019," said Datuk John Su Haw Tieng, Chairman of the Board of Governors.

"The building, when completed, will include an assembly hall, a science lab, a music room, a dance room, a computer room, a new canteen and an additional classroom," he said.

"The school still needs a substantial amount for the building project."

"Some 15 years later, St James Primary School moved into its own building, a semi-permanent single-storey one completed in 1983, at its present location in Likas. But within three years, the school became overcrowded," said Su.

The number of students continued to increase each year, which continually imposed pressure for additional classrooms and supporting facilities from 1995 onwards, which saw three-storey classrooms and administration block plus additional class and activity rooms built in the 1990s. In 2009, a four-storey U-shaped block for even more classrooms was built, Su pointed out.

Although St James has excelled academically and also in extra-curricular activities as a consistent winner in State and national competitions for sports, dance, music, computer robotics and cultural performances, sessions for such facilities could only be done in borrowed facilities around Kota Kinabalu, said Su.

"It is time to have such facilities within the school premises for easy access and to enable wider participation by the students," he added.

He appealed for generous support from friends of the school, businesses, parents and the public.

Incidentally, a 50th Anniversary Commemorative School Magazine will be published where names of the donors and the amount of their contributions will be acknowledged.