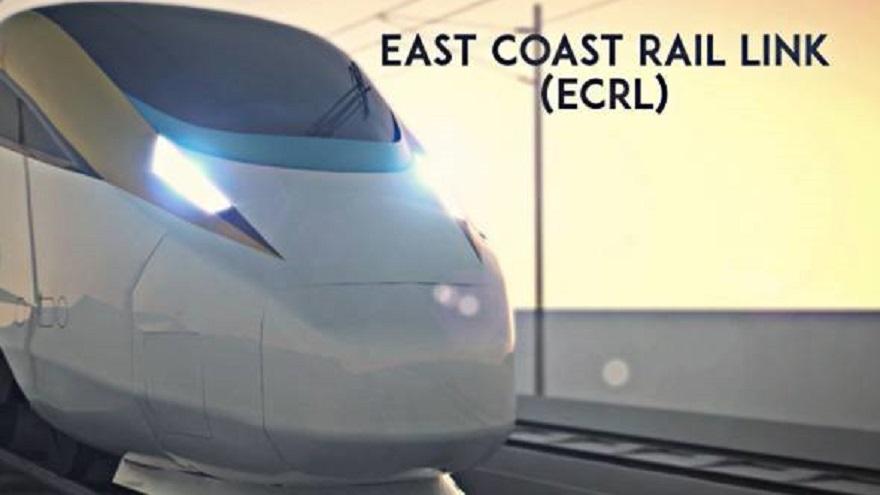 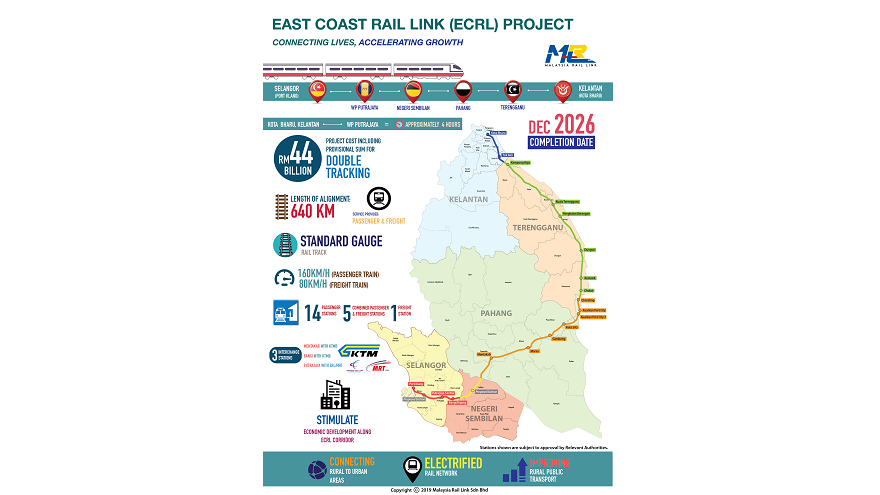 
The spillover effects of the East Coast Rail Link (ECRL) project are projected to change the socio-economic landscape of the states concerned and stimulate economic development.

The mega public transport initiative, involving a 640-kilometre track, is expected to have a huge impact on the states which will be in the path of the ECRL, namely Kelantan, Terengganu, Pahang, Negeri Sembilan, Federal Territory of Putrajaya and Selangor.

The project is expected to be completed in December 2026, with the realigned track passing through 20 stations, starting from Kota Bahru to Kuala Terengganu, Kuantan and Mentakab in the coast and then Jelebu, Bangi/Kajang, Putrajaya Sentral and, finally, Port Klang.

On April 15, Prime Minister Tun Mahathir Mohamad announced the resumption of the ECRL project and said its cost has been reduced to RM68.7 million per kilometre from RM95.5 million a kilometre as per the earlier agreement. The total cost of the project was slashed by RM21.5 billion to RM44 billion.

With Terengganu being on the ECRL route, Nazli hoped that it would help lower the cost of goods, especially food prices, in the state.

"This is because moving bulk cargo by train is cheaper than by air or via trucks," he said, adding that the prices of ready-to-eat food items were higher in Terengganu than in Kelantan or Pahang.

"For a long time, Terengganu has been depending on lorries to transport food items, whereas Kelantan has rail services and Pahang has port facilities," he said.

East Coast Malay Batik Makers Association chairman Kamarozzaman Mohd Salleh said the local business community was awaiting the completion of the ECRL as it would make it more convenient for them to travel from Kelantan and Terengganu to Kuala Lumpur for business purposes.

"We make frequent trips to Kuala Lumpur, so we support the development of the new rail link. It will benefit businessmen like me," he said.

(The ECRL is expected to reduce travel time from Kota Bharu to Putrajaya Sentral to about four hours, from eight to 12 hours at present.)

Mohd Pozi Hassan, who operates a 'keropok lekor' (a form of fish cracker) cafe in Kuala Terengganu, is also waiting to enjoy the spillover effects of the project.

"I expect more tourists to visit Terengganu, which will surely lead to better business for those involved in the food business," he said.

This, he said, would have a positive impact on Malaysia's construction, manufacturing and services sectors.

"Construction jobs valued at RM17.6 billion will be offered to local contractors.

"Apart from that, there will also be a higher demand for construction materials such as steel, cement and stones, as well as professional services of engineers, architects and quantity surveyors," he said.

Also set to swell is the demand for skilled workers, particularly those equipped with skills related to railway construction.

"We're aware that Malaysia has many technical and polytechnic institutes capable of producing skilled workers for the railway sector," he said.

The presence of a bigger workforce will spur the economy of small- and medium-sized businesses, as well as increase the demand for food, houses, grocery stores and transport in the states where the (ECRL) track will pass through.

Mohd Afzanizam added that the project is also significant when viewed from its long-term perspective as it is part of China's mega Belt and Road Initiative. Furthermore, the Kuantan Port-ECRL-Port Klang section will shorten travel time between the two ports.