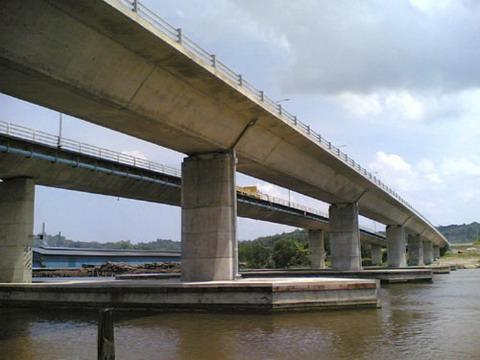 Bintulu will not be static because the state has a grand development plan for the town.

Part of that plan is a bridge across Batang Kemena, it was revealed yesterday.

“Bintulu is going to expand to the far bank of the Kemena River when the new RM250 million iconic bridge (Kemena Bridge) is completed in the next few years,” said Chief Minister Datuk Patinggi Abang Johari Tun Openg when he launched Parkcity The Spring (Bintulu) mall.

He went on to disclose that the tender for the bridge will be called “very soon”.

According to him, once completed, the bridge will link Kuala Tatau to Balingian and to Mukah.

“The Kemena Bridge was supposed to be carried out by the federal government, but they (federal) said no fund, so I said, never mind, because Sarawakians can build the bridge (Kemena Bridge).

“I am not being proud when I say that we Sarawakians are able to build the project, but since you (referring to the federal government) cannot do it let Sarawak do it,” he said.

Johari revealed that the state is also planning to relocate Bintulu administrative centre to Jepak, meaning some areas there will be allocated for the development of housing estates.

“The development of Jepak is another Petra Jaya in the making. Jepak will be directly accessible to the coastal highway and the airport, therefore its potential as a new business district of Bintulu will be enchanced,” he pointed out.

He said another project in the pipeline is the construction of a methanol plant.

“We can expect the oil and gas downstream activities to gain greater momentum in the next few years as we try to strengthen Bintulu’s position as Sarawak gas hub,” he further said.

On Spring Bintulu, Johari credited its management team under the able stewardship of its chairman Troy Yaw.

“Spring Bintulu not only promotes the retail industry, but tourism and agriculture as well. An entity like Spring Bintulu acts as the engine of growth,” he said.

He described Sarawak economy as multi-focused.

“With resources plus talent combined the state will have a better future and I hope by 2030 Sarawak will become a power house,” he said.

He is confident the Spring Bintulu will facilitate retail sales and drive private consumption besides creating jobs and enhancing the retail industry’s supporting services like logistics, maintenance and technical.

“Invariably the tourism sector will also benefit and with all other related industries, hotel and food in particular,” he said.

During the launching, Johari was accompanied by his wife Datuk Amar Juma’ani Tun Tuanku Bujang.

The Spring Bintulu is a RM300 million project that takes up retail space of approximately 388,000 sq ft.

It can accommodate up to 132 retail outlets, featuring international fashion and beauty brands and more dining and entertainment options for shoppers.

The two-storey mall is a joint venture project of Sarawak Land (Kemena Park) Sdn Bhd (SLKP), a member of Samling Group, and Benlong Sdn Bhd, a member of PE and PANSAR Group of Companies.