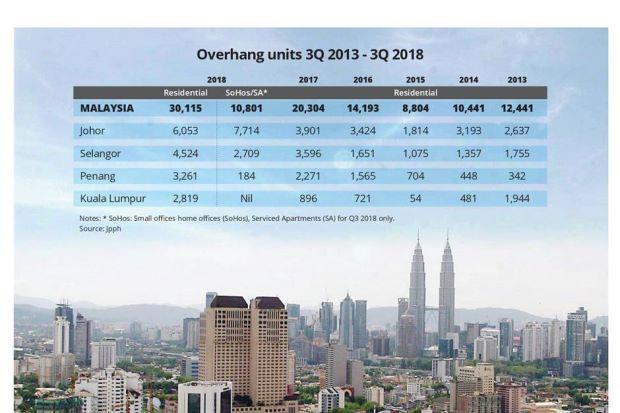 According to the Valuation and Property Services Department's (JPPH) latest figures released on Saturday, the total value was RM19.54bil, a 56.44% rise from RM12.49bil a year ago. Should serviced apartments and small offices home offices (SoHos) be included, the overhang value rose to 40,916 units, valued at RM27.38bil.

JPPH defines an overhang as completed unsold units nine months after launching, and after the issuance of the certificate of fitness by local authorities. This signify a dwelling is fit for occupation.The unsold units are across the board from RM50,000 or less to more than RM1mil. The concentration begins even from the RM200,000-RM250,000 segment with about 3,500 unsold while the bulk of the overhang are priced RM500,000 and above, with more than 12,000 units.

The government and the Real Estate Housing Developers Association are planning to launch a national home ownership campaign in January to resolve this blemish on the property sector. Individual developers are currently putting last minute tweaks to their campaigns.

Among those looking forward to unveil their bags of goodies are Ecoworld Group, Sunway and Mah Sing, just to name a few.

The overhang has been rising in terms of units and ringgit value for a few years now, with the exception of 2015 when the number of overhang units decreased to 8,804 units, valued at RM3.64bil. However, the numbers took off again a year later, with unsold units valued at RM8.27bil in the third quarter of 2016.

The situation then and now is further complicated with the completion of serviced apartments and SoHos which are built on commercial land, but which are also used for residential purposes.

This brings Johor's total overhang to about RM10.6bil, or more than a third of the national RM27.38bil figure, excluding other forms of unsold commercial properties like offices and retail in the state. Going by JPPH reports, Johor has the highest number of completed unsold units in the country, with 6,053, a 55% increase from the 3,901 units a year ago.

A source from the JPPH said the country's overhang scenario has somewhat changed with thousands of unsold serviced apartments and SoHos, a feature of urban centre living.

To circumvent high property prices, developers shifted their focus by building shoebox-sized units built in urban centres on commercial land which has a higher value than residential land.

Local authorities also convert land to commercial status in order to get higher land premiums from developers. Owners of these units also pay high taxes to the local authorities.

Developers "cut" the units smaller to bring the overall price down to give an illusion of affordability.

The JPPH source said: "Buyers bought these units because they were priced at around RM500,000 but they did not know that they have to pay higher serviced charges, utility bills and other taxes because of their commercial status.

"When they get the bills, they are shocked with the high charges," the source said. That is one of the reasons why buyers may be staying away from serviced apartments, he said.

It is also difficult to bring up a family in such homes because of the small size of these units. A minimum size of 1,200 sq ft with three bedrooms would be more ideal, he said.

Among the states that have a serious overhang are Johor, Selangor, Penang and surprisingly, Kedah. Known as the rice bowl of Malaysia with its paddy-farming community, Kedah with an estimated population of about 2 million, has an overhang of 3,450 units, reducing marginally by 2.38% from a year ago. Selangor's residential overhang rose to 4,524, up 25.81% while Penang, up 43.59% to 3,261 units.

He said JPPH depends on data fed to them by developers. Developers holding back information will not give a true and fair view of the situation. According to JPPH's latest report, Kuala Lumpur has no unsold completed serviced apartments/SoHos.