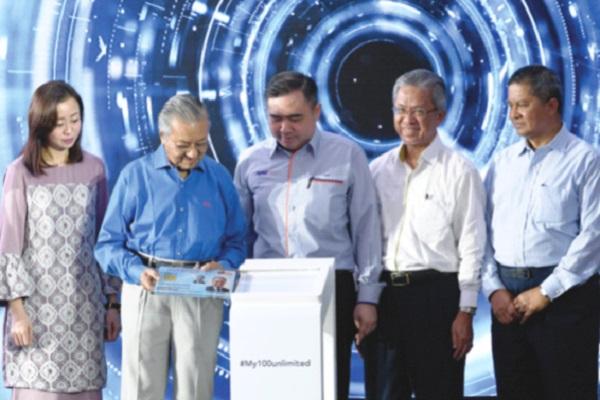 
The Pakatan Harapan (PH) Government on Saturday launched the unlimited travel pass, known as My100 and My50, in a move to reduce the cost of living for the people.

Prime Minister Tun Dr Mahathir Mohamad said the facility, which would be implemented in the Klang Valley effective Jan 1, 2019, would also be extended to other states in the future.

"As a trial run, we will start in Kuala Lumpur so we can know if there are weaknesses to rectify. We are doing this to reduce the people's burden so that they can enjoy a better life," he said at the launch of the travel pass at KL Sentral Saturday Also present were Transport Minister Anthony Loke Siew Fook and Minister of Tourism, Arts and Culture Datuk Mohamaddin Ketapi.

Dr Mahathir said the introduction of the travel pass was also an initiative by the Government towards promoting the culture of cashless society, which among others could curb corruption.

"Cash makes easy for bribery, but cashless is hard to bribe because every trip will be recorded so we can know who accepts and gives.

"If corruption is widespread in our country, everything will be expensive because payment has to be made to certain quarters to approve a request," he said.

In his speech, Dr Mahathir said that as promised in its manifesto, efforts were always made by the Pakatan Harapan Government to reduce the cost of living of the people, adding that the Government was always open to receive views and suggestions from any quarters.

Earlier, Dr Mahathir took the opportunity to board the LRT light rail transit system from the Universiti Station to KL Sentral for the launching ceremony.

Subscription for the travel pass can be made using MyKad, MyKid and MyTentera at the Touch and Go to ensure that the facility is enjoyed by Malaysians only.

The My100 pass allows commuters to access unlimited ride for 30 days on all forms of RapidKL rail and road transport, including MRT, LRT, monorail, BRT Sunway, RapidKL buses and MRT feeder buses.

With the My50 pass, commuters can enjoy unlimited rides for a period of 30 days on all RapidKL buses and MRT feeder buses, not including BRT.

Meanwhile, Loke said the unlimited travel pass would benefit at least 45 percent of Rapid Rail service users and almost 100 per cent of Rapid Bus users in the Klang Valley.

He said the use of the travel pass could reduce the travelling cost of commuters, with those staying in Kajang, but working at KLCC, by at least RM180 a month.

"The introduction of this travel pass is also expected to attract those who drive their own vehicles to take public transport, hence helping to reduce congestion especially in the city centre," he added