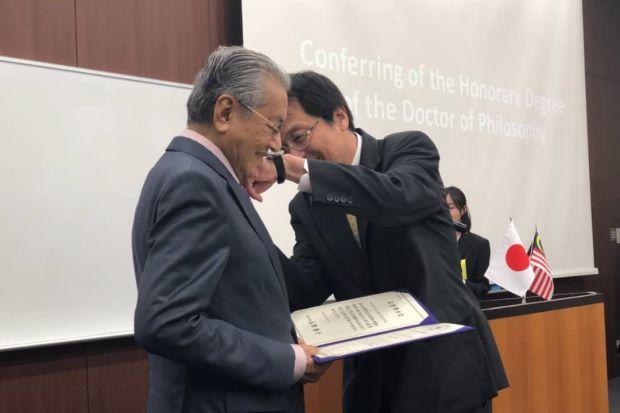 A long-time admirer of the Japanese work culture and value system since his first visit in 1961, Dr Mahathir said he understands that there are certain rules and laws that prohibited these universities from setting up branch campuses overseas.

"When I (first) became prime minister (in 1981), I was able to introduce the Look East Policy, which is not just about acquiring knowledge, but also the character, lifestyle and values of the East.

"One of the best ways to learn the Japanese work ethic was to send students to workplaces. They have come back and contributed to the economy," he said.

However, Dr Mahathir said over the years, the value of the Japanese yen had become higher. So one way to get Malaysians to learn more of the Japanese way of doing things was to get its universities to set up branch campuses.

"Tsukuba University could consider coming to Malaysia and setting up a branch campus. We are working hard on this.

"I hope they can overcome the obstruction and have a Japanese university in Malaysia to teach the language and culture.

"The cost will be much lower and Malaysia can become a centre for those from Asean to learn at a Japanese university without going to Japan.

"I have great admiration for the Japanese culture and in Malaysia I always talk about the sense of shame that the Japanese have," he said in his speech.

"In the good old days when they failed to deliver what they have undertaken, they committed harakiri (ritual suicide).

"In Malaysia, sometimes we don't feel ashamed even when we fail. In fact you see people going to jail not feeling ashamed at all, they are smiling.

"So we need to change that culture. If you have a sense of shame, it should drive us to achieve the objective every time we are tasked with some jobs," he added.