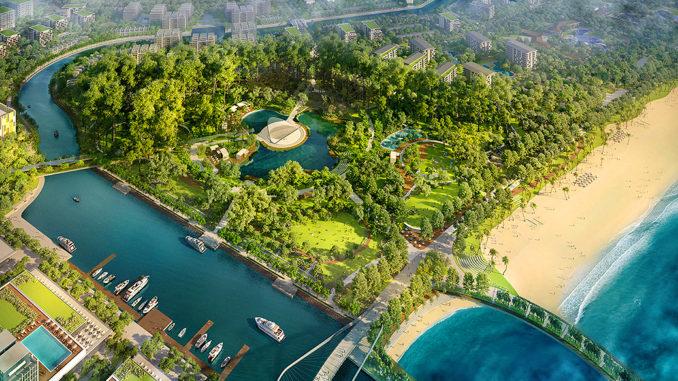 Debate Rages on Over Tanjung Aru

LEAP's Biodiversity Manager Sylvia Yorath was especially concerned that the massive reclamation stretching up to one kilometer from the existing beach, and the dredging needed to create a 42- metre wide canal.

"This could be disastrous for the whole Tanjung Aru seafront and potentially impact the nearby Tunku Abdul Rahman Marine Park.

"The canal itself would effectively create a huge island with the proposed hotels, Prince Philip Park and new beach on it, with public access restricted to just two small bridges.

"Existing biodiversity, from the stunning fig trees at Third beach and the iconic Aru trees right along the shoreline to the thriving community of sand crabs on the beach would be at stake if the project were to go ahead and it should never have been touted as an â€˜eco' project" she said.

Sylvia added that the problem of the hazardous drains pouring out into the sea there should be addressed at source i.e. upstream from the beach, as well as at Tanjung Aru itself, in addition to systematically improving sewage, drainage and rubbish collection facilities at the beach and eating areas.

Meanwhile, LEAP's CEO Winnie Long reminded that over 20,000 people from all walks of life in Kota Kinabalu and the rest of Sabah have expressed their dismay and concern about the proposed project by signing the â€˜STOP TAED' petition, which she considers an unprecedented show of opposition to the project and in favour of saving Kota Kinabalu's last remaining natural beach.

"LEAP backs proposals to make the area between the beach and the road to Terminal 2 a public area and include new features such as a botanical park and cultural heritage area for the public to enjoy, as well as for proper maintenance and upgrading of the historic Prince Philip Park" she said.

While LEAP welcomes investment in Sabah's infrastructure, Winnie nonetheless stressed that these should be on the scale we can afford and manage ourselves. This is so that our heritage does not become owned by outside interests, who leave us with any problems these investments make.

"The current TAED plans require many billions of external investment: by inviting this we accept that all that money and profit will need to leave Sabah again. The current TAED design requires expensive foreign technical experts to even explain all the engineering needed on an on-going basis to prevent disaster for the project and neighbouring areas. Why should we make ourselves so dependent and vulnerable? We can create many more jobs with less risks using small to medium scale investments that will also attract less corruption" she contended.

Winnie added that LEAP looks forward to a new era of inclusive and transparent decision making, where the diverse views of people from all sectors are valued and respected.

TAED, estimated to be able to generate RM31 billion in gross national income, is a state project launched in 2015 by former Prime Minister Datuk Seri Najib Tun Razak. Its official â€˜owner' is the state government through a company controlled by the Chief Minister's Department.

The project's status became uncertain with a new government sworn in last May. The ruling party, Parti Warisan Sabah, had pledged in its manifesto to shelf the project.

Current Chief Minister Datuk Seri Mohd Shafie Apdal has been ambiguous whilst one of his key cabinet member, Agriculture and Food Industry Minister Junz Wong, remains opposed to the project which happened to be sited within his Tanjung Aru constituency.