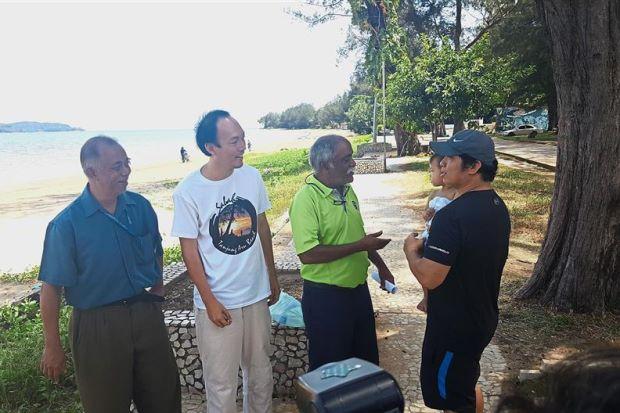 A conservation group today welcomed assurances by a state minister on the shelving of the controversial Tanjung Aru Eco-Development (TAED) project, saying it hoped for an official announcement from the government soon.

Save Open Space (SOS) Kota Kinabalu spokesman SM Muthu hailed the statement by Agriculture and Food Industry Minister Junz Wong, who had said the land title would be transferred back to the Kota Kinabalu City Hall (DBKK).

The title is under Tanjung Aru Eco-Development Sdn Bhd, which is wholly-owned by the state government.

"We welcome his (Wong) reassurance when he made a firm and clear stance that the TAED will not go on and that the said land will revert back to DBKK, to be upgraded and remain as an open space for the good of the public.

"We look forward to a formal statement from Chief Minister Shafie Apdal and his Cabinet about the future of the Tanjung Aru beach" he told reporters here today.

"We hope the government will tell the people of Sabah (that) TAED is definitely a no-go, no reclamation or any commercial development. If possible, turn it into a city garden but the Prince Philip Park and Tanjung Aru beach must always be there.â€

Wong, who is also Tanjung Aru assemblyman, told local dailies that the land title would be returned to DBKK for new upgrading work for Tanjung Aru beach and the Prince Philip Park, one of the city's oldest green lungs.

He also said the state Cabinet would discuss the future of TAED as soon as possible but added that as far as he was concerned, "there will be no more TAEDâ€.

The multi-billion ringgit TAED project, which was supposed to be built on a 345-hectare site about five minutes from the city centre, is currently on hold pending a decision from the new state government.

Muthu said the state of the iconic beach had deteriorated since the TAED project took off.

"Legally, it's not DBKK's baby because it was taken over by TAED, which should have taken care of the beach but they just left the place to rot. We also don't know when the work was supposed to start.â€

Commending DBKK for its work in sprucing up the beach, he said it must continue to monitor and maintain the area.

He said SOS had no problems if the current government builds new facilities in the area but added that the number of food stalls should be restricted.

"They should control, maybe give higher rental but limit so there will be more business for them. Most important is cleanliness and security" Muthu said, thanking Deputy Chief Minister Christina Liew for her quick action in getting DBKK to clean the area.

SOS also called on the new government to investigate TAED.

"Repeal the TAED local plan and return the Tanjung Aru beach foreshore reserve and create a buffer zone or spaces as a city park" he added.