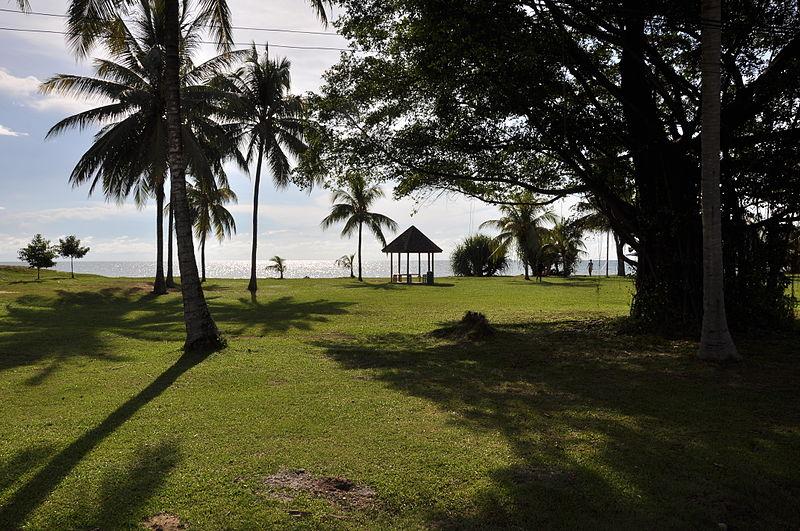 TAED, the Next Property Investment Hotspot

Palm trees. Ocean breeze. Beautiful sunset. That's what Tanjung Aru is best known for. Sabah is blessed with many great beach locations, and although most of them are a little distant from the city, one in particular is worth a visit.

Taking its name from the casuarinas or Aru trees that surrounds the soft sandy beach, this is the place for people to get the best seats for viewing the greatest sunset on earth every evening when the crimson sun slowly dips slowly into the horizon, leaving the vast skies fiery orange.

Tanjung Aru has transformed quite a bit from hawker stalls to restaurants and beachside cafes. The beach is divided into three sections - Beach 1, Beach 2 and Beach 3 and has a sentimental value to all Sabahans.

However, today, Tanjung Aru has lost much of its glory. What was once a soft sandy beach with crystal blue waters is now, on a bad day, smothered with trash washing up on the beach and the smell from nearby storm-water drains waft on the breeze, but bad days, luckily, are outweighed by what's to come.

The State Government has proposed to redevelop the area under the Tanjung Aru Eco Development (TAED) project to revitalise the beach and its surrounding areas.

The proposed plan is said to include sea reclamation and various NGOs have opposed to this, saying it doesn't make sense to destroy a natural beach and replace it with an artificial one.

The 642-acre Tanjung Aru Beach in Kota Kinabalu is set to undergo a massive eco-tourism redevelopment that would make it a world class destination. Dubbed as one of the top spots in this region for sunset watching, the Tanjung Aru redevelopment covering more than 123 acres will see half of the area as public space. The balance would involve the construction of tourism facilities including high-end resorts and a marina that would be built according to stringent and controlled environmental standards.

Barring any hiccups, the multi-billion-ringgit TAED project which will transform Tanjung Aru into one of the region's best tourist spots will proceed as planned following the provision of a RM500 million facilitation fund by the Economic Planning Unit (EPU) in the Prime Minister's Department.

The TAED project will start work in Q2 2018 with the Phase 1 of the development, said Datuk Seri Victor, who was appointed as Executive Director to manage the project on pro bono basis due to his experience in building and managing Perdana Park.

The construction site for the Phase 1 work is at the First Beach area or will be known as Aru Gateway which is approximately 64 acres, with a mixed commercial area stretching along Mat Salleh road.

"We will keep the Second and Third Beach areas open to the public while work on the first phase is being carried out. This project is expected to be ready in 36 months" he said.

The project was scheduled to move into the first phase in 2016, with Luyang Assemblyman Hiew King Cheu calling on the state government to start the projects without any further delays despite the concerns from conservationists. He argued that the projects would bring job and economic opportunities to the locals, and that the environmental upgrade would attract the people's interest to visit and live in the area.

Victor said only 31% of the 860-acre redevelopment area would be utilised, while the remainder would be returned to the people of Sabah through public amenities such as Prince Phillip Park.

The project drew concerns from local conservation groups, who labelled it as being unfriendly to the public and lacking in transparency and launched a petition to stop the project. Due to the concerns raised, a Special Environmental Impact Assessment (SEIA) report on the projects was released in 2016 to share the feedback and recommendations from the public.

The development is also the first approved scheme in Sabah, meaning that it is an independent area, he said, adding that, they are also trying to get tax exemption for the development. He said the development will increase employment opportunities for the people across the board.

He added that Sabah's Chief Minister Tan Sri Musa Aman wanted to return Tanjung Aru Beach to the people of Sabah. Top experts from their respective fields such as contractors, consultants, environmentalist etc have been engaged to help development the project. Datuk Seri Victor has proposed that a certain 14 acres of land to be developed into affordable properties for the younger generations of Sabah. The cost of the land is to be absorbed by TAED.

"The catch is that you cannot sell the residential unit in the first five years. The second catch is that the unit can only be sold back to a local resident (Sabahan only)" he further stated.

"Tanjung Aru Beach had undergone heavy erosion over the last 50 years and that despite efforts by the Sabah government to stop the erosion through the setting up of barricades against the sea waves, it had failed" said Datuk Seri Victor. He further added that they want to create a sustainable eco-development to have an engine of growth.

Beaches have always enlightened the mind and heart of generations, with fun, joy, and peace. Children's love for the beaches is unquestionable. Running aimlessly on the sand, building sand castles, and crushing into the gentle waves, seem to bring endless fun and joy to them. While adults would organize lots of activities at the beaches, from families picnics to BBQ parties, from leisure activities to competition sports. Many people weekends' blissful lives evolve around the beaches too.

For the peace seeking individuals, walking along a quiet beach, listening to the sound of the rushing waves, and absorbing the beauty of nature around, can do a lot of good for the heart and soul.

Tanjung Aru coastal town will turn into a premier international green tourism destination and a sprawling commercial, residential and recreational centre once the project completes.