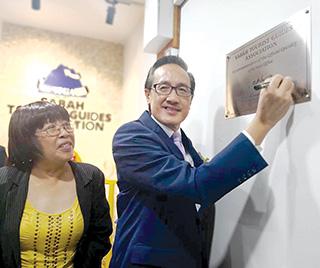 "Of course we want to leverage on the industry that is doing well, but at the same time, I think it is also important to continuously improve ourselves. I know this profession is not easy, there are a lot of challenges, more so now that we have so many tourists," he said when launching the new Sabah Tourist Guides Association office in Lintas Square on Monday, 26 March.

He recalled the days when people complained about the lack of jobs and now people are complaining about not being able to cope with the job. "The reason is simple. We have done fairly well in tourism, especially in the Chinese market, and I want to tell you that other things being equal, to continue doing a good job, the sky is the limit for us in terms of achievement in the tourism industry. "We can expect more tourists, especially with the newly-launched weekly flights from China by Malindo Air and Lucky Air.

He said over time there are going to be new markets in Asia or even other parts of the world, citing Vietnam, Cambodia and of course, more islands opening up for tourism in Indonesia.

"The good thing about Thailand is that they are very versatile. If anything happens, they will be back on their feet in a couple of weeks. This is why I said we need to leverage our success on the experience of other countries.

He said Malaysians are more likely to come over to Sabah, being from the same country and secondly, is they have to travel anyway.

"When economically it is not a good time, more likely tourists will travel within their own country and the same applies to our country," he said.

"The point I am trying to say is that I am not saying bad things will happen, what I am saying is yes things are running well for us, but at the same time we are ensuring ourselves that if anything falls in the industry, we also have other things to fall back to," he said. He also reminded tourism players to respect each other and at the same time learn to accept the fact that sometimes we agree to disagree.

He also thinks that if there is a problem within the organisation, officers should be reachable and accessible to everyone.

"Sometimes it is not easy but I think the best way to sort out a problem is to just see us, sit down with us and sort out the problem. "Of course once in a while you like your face to be in the newspapers, you shout outside, if doing so can solve the problem then by all means, but if it doesn't solve the problemâ€¦you are actually putting yourself further away from those who may be able to help the organisation and I don't think that is the best interest of the organisation," he said. Meanwhile, the Ministry donated a total of RM10,000 to the association in conjunction with the opening of its new office premises.

The STGA currently has 600 members, out of which 400 are English and Chinese speaking guides, while the rest are foreign speaking guides. The new office premises located on the third floor of the Lintas Square Block G can accommodate up to 36 guides at any one time.