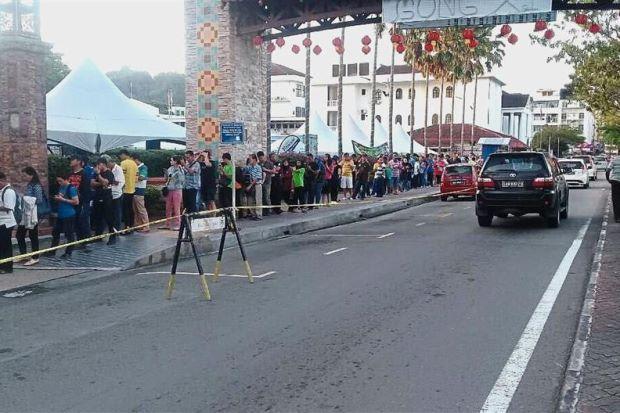 Hundreds of motorists stood in long lines outside KK City Hall on Friday, 2 February to take advantage of the RM10 one-day only amnesty for outstanding parking tickets.

Crowds turning up as early as 6am with some coming from as far as Sandakan, Kudat and Papar were seen queueing along the pedestrian walkway outside City Hall to settle their outstanding parking compounds.

Mayor Datuk Yeo Boon Hai said the turnout was overwhelming and unexpected, noting that by noon some 10,000 outstanding parking summonses were settled.

"We have never seen this kind of reaction to previous amnesties; we've opened 30 counters to cope with the large crowd" he said on the amnesty which coincided with the city's 18th anniversary.

"We are very happy and thank the people who came forward to pay the parking compounds" said Yeo who was on the ground together with his Director-General Datuk Joannes Solidau and other senior officers to verify and sign the compounds.

In response, Yeo said City Hall have decided to extend the RM10 offer for one week starting from 2 February, with counters remaining open from 8am to 5pm.

And for the convenience of the people who could not wait for their turn to pay on Friday, DBKK would stamp their compounds to give an opportunity for them to pay within seven days and still enjoy the flat rate of RM10 per compound, said Yeo.

"There is also a new development that happened during this programme; many people seem to be using the internet to download copies of the parking offences through our e-services" he noted.

Meanwhile, Assistant Minister to the Chief Minister, Datuk Edward Yong Oui Fah said all compounds issued under the municipal by-laws, including illegal parking and coupon parking offences, will only be charged RM10 for each compound.

Furthermore, he noted the RM10 discount also applies to motorists who have debts of parking fines (under previous parking ticket systems before the implementation of the coupon system).

Edward underlined there were about 820,000 outstanding parking compounds and called on vehicle owners to take advantage of the amnesty.

To date, he noted there was 500,000 summons issued by City Hall for illegal parking and some 320,000 summonses were issued for motorists for failing to settle their payments through the coupon system since 2013.

"We hope that motorists can take advantage of the amnesty" he said. After the 2 February deadline, DBKK Holdings Sdn Bhd will continue with the amnesty month for compounds relating to parking coupon offences and amounts overdue for parking tickets.

City Hall will also allow motorists to settle their summonses at discounted rates until March 31 but they would have to pay the original fee due from the parking summons.

Motorists could check whether they have any parking compound through the https://ecompound.dbkk.sabah.gov.my.

To check their parking offences compound, they can call City Hall's Enforcement Department at 088-521800.