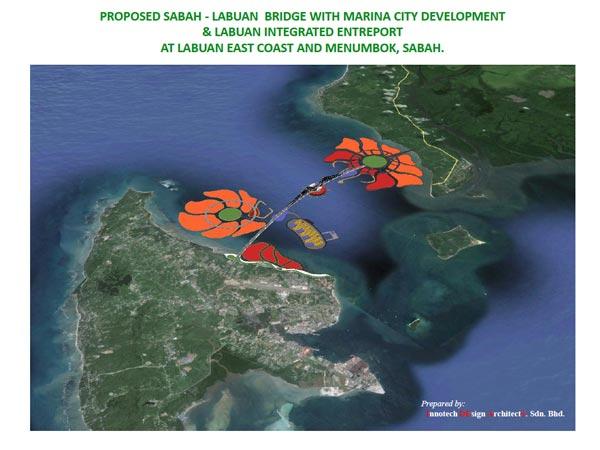 
People may no longer have to fly in or take an hour's ferry ride to Labuan from the Sabah mainland under a plan for a bridge connecting the island to Menumbok.

The bridge is set to become a reality under the Labuan Development Blueprint announced by Prime Minister Datuk Seri Najib Tun Razak to transform the international financial centre.

Although the Government had only approved the feasibility study so far, he said the bridge was necessary to spur the island's economic growth, currently hit by the international oil and gas downturn.

"It is not just a feasibility study for a bridge but a study on the best implementation method" he told Labuan folk at Carnival Rakyat where he launched the blueprint on Thursday, 18 January.

The economic modernisation of Labuan, added Najib, was necessary as the recent oil and gas downturn had affected Labuan folk.

"Oil prices are improving, although we don't expect them to go as high as previously" he said.

Najib hopes the study will be completed soon so that a decision can be made.

Labuan residents have been looking forward to a bridge for a long time.

While critics had said that the cost of such a bridge would not be viable, Najib said it would act as a catalyst for the people and the island, drawing more investments as well as spurring tourism.

Under the blueprint, the Labuan waterfront will be redeveloped into an esplanade with a theme park and shops selling designer goods to bring in more tourists and shoppers.

An international Power Boat Race would also start next year, he said.

"As an international financial centre, Labuan has grown and become well known in the Asia-Pacific region.

"The plan will relook at strengthening the offshore financial services and integrate these into the local economy" Najib said during a media conference at the event.

Currently, people have to either fly to the island or take a ferry.

Speedboat services are also available, taking about 30 minutes from Menumbok.

Najib, who also launched two housing projects during the event, said 500 units of flats would be built under the People's Housing Project in Batu Arang, which are available for RM124 in monthly rent or purchase at RM42,000.

"The actual value is about RM133,000 but the Government is subsidising it" he said, adding that another 165 new houses in Tanjung Purun would be sold to civil servants at RM190,000, or about 40% lower than the market value