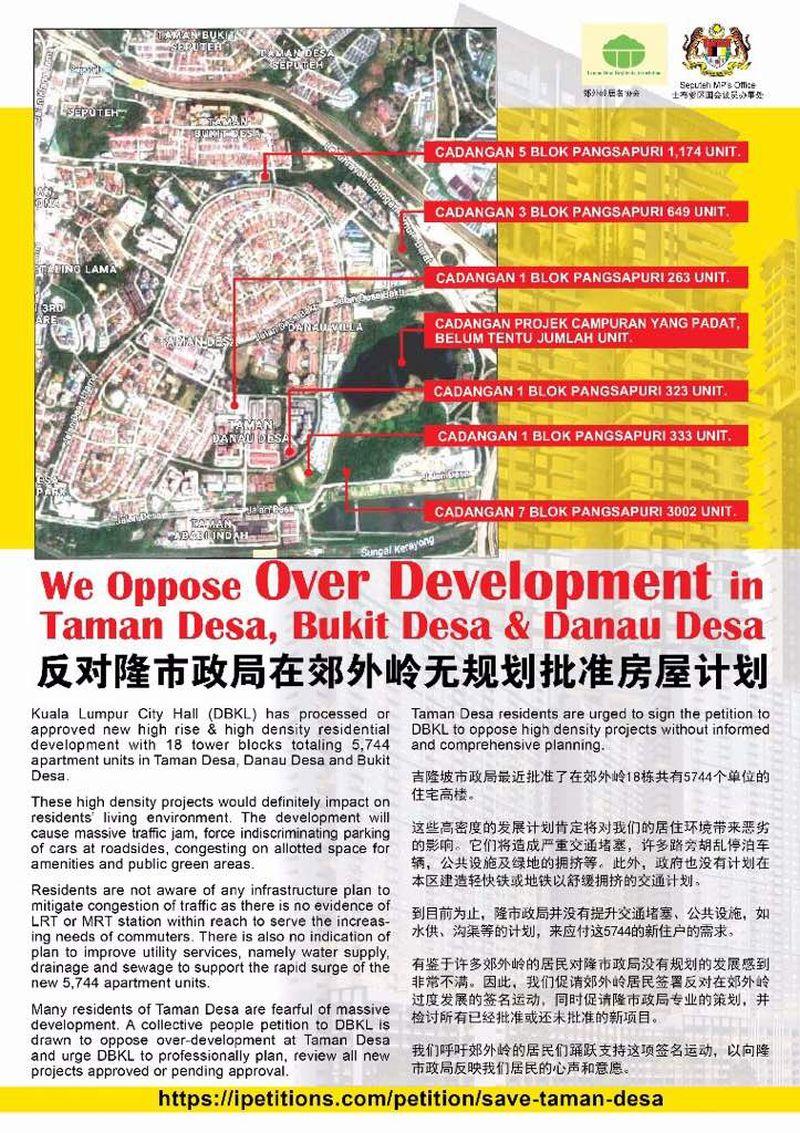 KUALA LUMPUR â€• Residents in Taman Desa, a Kuala Lumpur neighbourhood, have started a petition to protest the building of new condominiums, citing concerns of overdevelopment.

Taman Desa Residents Association vice-president Yap Biow Hwee explained that the petition was initiated about a week ago, in response to concerned residents who had approached the association.

"Because a lot of people are in the dark about what exactly is happeningâ€¦ it's a request from residentsâ€¦ we as the residents association, we do the job. But it is a request of residents because they are fearful of what is happening" he told Malay Mail Online.

"It's a residents' petition facilitated by Taman Desa residents association" he said.

Earlier yesterday, Yap had in a press conference highlighted the petition which can be signed both physically or online at https://www.ipetitions.com/petition/save-taman-desa.

The online petition states that it is a joint effort by the Taman Desa Residents Association and Seputeh MP Teresa Kok, as the latter's parliamentary constituency covers the mature neighbourhood of Taman Desa.

It also urges Dewan Bandaraya Kuala Lumpur (DBKL) to review all new projects in Taman Desa that have either been approved or are pending approval.

Yap said City Hall's approval of new housing projects in Taman Desa would contribute to an over 70 per cent increase in residential units there, which he said "frightensâ€ existing residents.

"There are altogether seven known projects that have been approved with a total unit number of 5,744 units, whereas we only have 8,000 units in Taman Desa" he said.

He was referring to a map by the association of proposed new high-rises, with six projects advertising a total of 5,744 units while the number of units in the seventh project is currently unknown.

Noting that Taman Desa already has more than 30,000 residents in about 8,000 housing units covering Taman Desa, Taman Danau Desa, Taman Bukit Desa and the Taman Abadi area, Yap said the new projects would conservatively add on another 10,000 residents to the decades-old residential area.

"Taman Desa's infrastructure was designed 40 years ago, so the roadsâ€¦ we can't imagine. The water pipes and drainage and sewerage, we don't see any evidence that they have any plans to expand it.

"That's very worrying and traffic at the moment is very congested" he said in expressing concern of the neighbourhood's capacity for more residents, noting that there are five schools in the area.

Prior to this signature drive, Taman Desa residents had been writing to DBKL to voice their objection whenever a new housing project was advertised, he said.

The first project was made known in the middle of last year, Yap said, noting: "They keep on adding projects very quickly beginning this year. This year alone, I think they have approved five.â€

He said DBKL has held hearings for some of these projects, but did not call for hearings for projects under the Federal Territories Ministry's affordable housing programme RUMAWIP.

"We don't know why they don't call for hearing. The other projects we went for hearing, we protested, we write minutes and hand it back to them, we have not received any reply" he said of DBKL.

Yap said the target is to collect at least 2,000 signatures from residents by the end of this month, before the petition is handed over to the top officials in the Federal Territories Ministry or DBKL.