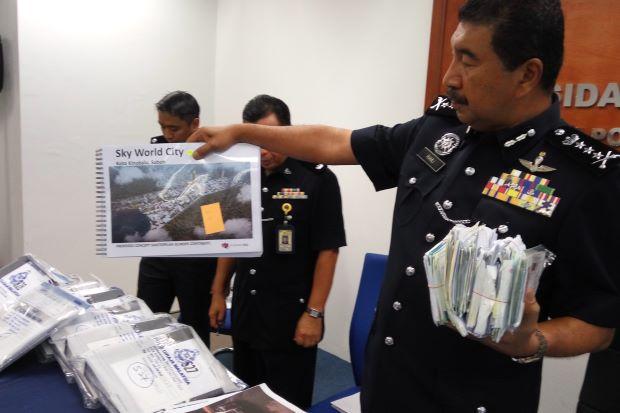 Kota Kinabalu: A real estate showroom was raided and a 43-year-old man was arrested as part of investigations into a property investment syndicate targeting China, Hong Kong and Taiwanese nationals.

The syndicate is said to have collected millions of Ringgits from the "investors", even throwing a lavish gala dinner at a five-star resort when it launched the "tourism centre project" last week.

The raid followed a call by the Federation of Chinese Association Sabah (FCAS) on Monday (16 Oct), urging the local authorities to be more "diligent and proactiveâ€ in safeguarding Sabah from unscrupulous individuals or syndicates who are preying on unsuspecting foreign investors.

Sabah Police Commissioner Datuk Ramli Din said the suspect, who was arrested on Tuesday (17 October), from Kedah has a record for gang robbery and kidnapping.

He said that the company was set up to lure people from the three countries to invest in the project located on a 84ha piece of land at Karambunai.

When contacted on Wednesday (18 Oct), Ramli confirmed the case, adding that he will be giving more details concerning the matter during the press conference today.

The development model displayed by the company shows model buildings that look like the Petronas Twin Towers in Kuala Lumpur, Burj Al Khalifa in Dubai, Taipei 101, Eiffel Tower in Paris and Tokyo Tower.

The said development project became a hot topic in town lately when the company involved brought in a huge group of investors from China over the weekend, for a tour and inspection of the project site.

On Sunday (15 October), three owners of the affected pieces of land in Karambunai lodged police reports over trespassing of their land by the company.

The next day (16 October), however, the company held a project launching and joint venture signing ceremony at the Likas Sport Complex, which was attended by more than 2,000 people, mostly Chinese tourists. The event was also "live streamed.â€

Police have seized documents including piles of bank payment slips from Taiwan, Hong Kong and China.