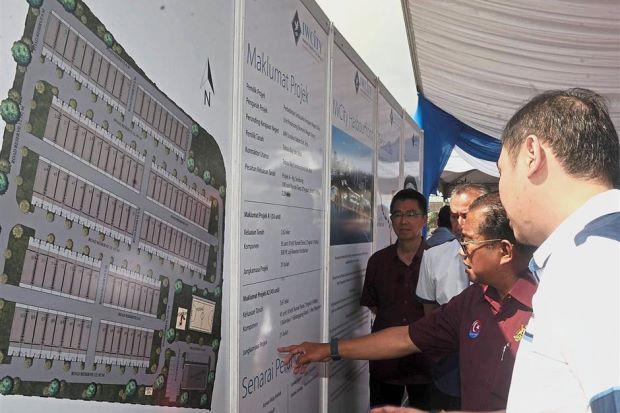 Concerned about the low take-up rate of bumiputra lots, the state government will look for ways to help developers sell the unsold units.

"One of the factors for this situation is the high property price leading to not many bumiputras being able to afford them" he said, adding the state government would discuss the matter with developers to find a solution.

He said if the developers wished to change the bumiputra status in order to sell the properties, they would be charged a certain amount to proceed with the action.

"The charged amount will be utilised by the government to build other bumiputra-status properties in other areas, which is part of our strategy" he said.

During the event, Mohamed Khaled, who is also the patron to the cooperative, announced that about 100 villagers of Kampung Senibong would soon be offered double-storey terrace houses, following the redevelopment of the area.

He said construction of the first phase of the project totalling 50 units is expected to start in October and scheduled for completion in 2018.

He added that the remaining units would be built once the first phase was completed.

Mohamed Khaled added that some 210 units of flats would also be built during the second phase of the project and that the units would be reserved for the villagers' children in the future.

He also said Iskandar Waterfront Holdings Sdn Bhd (IWH) would be developing the project and each house measuring 1,400 sq ft would cost about RM300,000 to build and would be sold at RM25,000 per unit.

"This project is in line with the redeveloping of the area as we do not want this village to get left behind in the state's progressive development.

"Maybe in the future, after the project is completed, this village can be rebranded from Kampung Senibong to Taman Senibong" he said.