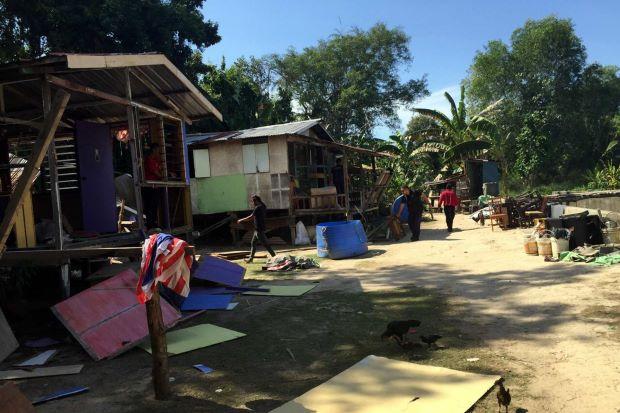 City Hall is preparing to take to court squatters who set up illegal structures on government land.

"We are now in the process to use the law to investigate and bring these squatters who build these illegal structures to court," said City Hall Enforcement Department Director Abdul Mukti Muchlish.

"We have issued the notice earlier to them as the building was illegally constructed without proper approval and we will be conducting demolition exercises today," he added.

Mukti said this to the media during a joint City Hall several government agencies operation to demolish 170 squatter homes in a three-day operation at the mangrove areas located close to Alamesra on Monday, March 27.

According to him, the operation to demolish the illegal structures is the fourth for the area which is located on state land.

He said a total of 104 personnel were involved in the operation in which 170 squatter homes were detected.

"The authorities are active in checking in the area and conducting raids. For City Hall, we will do a repeat demolition each year.

We have also noticed after we carry out a demolition exercise the squatters will set up their homes further in the mangrove swamps in a bid to hide from the authorities."

He said City Hall often received complaints that the inhabitants of the squatter area here have engaged in theft and disturbance in the nearby Alamesra housing areas and that when chased by authorities they will run into the mangrove area to evade capture.

He said the operation so far saw no unwanted incidents thanks to the cooperation of City Hall departments and personnel together with nine other government agencies, including the police, Immigration, Land and Survey, National Registration Department and others.

On steps that City Hall had taken to prevent the squatters from rebuilding, Mukti said they will continue to monitor the area and also take legal action against them.

This article was extracted from Daily Express.