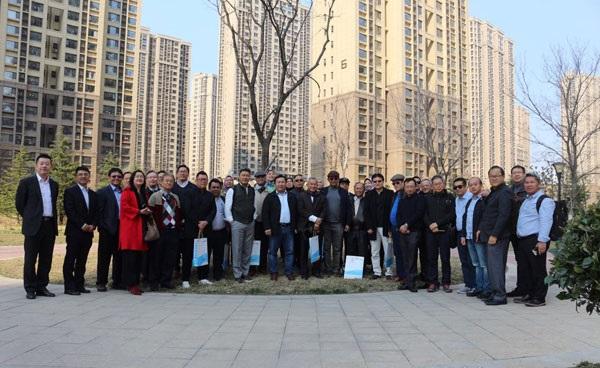 The solution to the state's affordable housing issue will be a two-pronged approach concentrating on simultaneous housing and economic development, said Assistant Minister for Urbanisation, Datuk Talib Zulpillip, after taking a tour of the sprawling Henan old village reconstruction project.

The project is a massive 48.7-hectare village that was reconstructed by the Qingdao Construction Group Corporation Ltd. into the current Zhonghai International Community Complex which has more than 30 high-rise residential buildings and over 3,000 residential dwellings.

The substantial modular system-built housing estate, which took only two years to complete, was part of a working visit organised by the Ministry of Housing and Urbanisation and Sarawak Housing and Real Estate Developers Association (SHEDA) Kuching branch. The short time frame to build such sprawling housing estate is truly a feat of modern engineering.

However, this was not what impressed Talib as he instead found the social impacts that project brought about to be the main lesson to be taken from the visit.

"For me, the project is a success because of some 3,000 new dwellings they've constructed, over 60 per cent of them are original settlers. That's extremely impressive and they've achieved this by providing their people priority over foreign buyers to the purchase of the new dwellings" he said.

The housing estate is quoted to have a 100 percent take-up rate and each unit is estimated to cost around RM1.0 million, which is not exactly affordable housing.

According to Talib, the reason people in the area can afford to buy these units is because the economy in Qingdao is working very well.

"They (Qingdao locals) can afford to buy these units because of the well-developed economy in the area. Their wages are high so the cost isn't so much of a burden for them to bear.

"This is definitely something we should emulate as affordable housing is not just about building cheaper houses. It's a two-pronged approach where we need to build the houses our locals need while creating high paying jobs so they can afford them" he opined.

Agreeing with this sentiment is Sheda Kuching branch advisor and general manager of Sim Swee Yong Development and Construction Sdn Bhd, Sim Kiang Chok, who reckons that the lessons to learn from Qingdao's housing and development efforts are that there needs to be more support for business activities within Sarawak.

Dominic Su, chief executive officer (CEO) of Regal International Group and Sheda Kuching Branch member, believes that one way of achieving this is through strategic planning for both current and future needs.

"I think Sarawak can learn from this as I believe that in Sarawak, there needs to be holistic planning integrated into the housing industry to suit the future needs of our people. And for this to happen, the private and government sectors will need to have more open lines of communication and better cooperation" he declared.

To achieve the goal in a more cost effective manner, Sim suggested private developers should seek partnership with modular housing manufacturers to assist in providing large public housing projects for the government such as housing estates for the PR1MA projects for affordable housing schemes organised by the government.