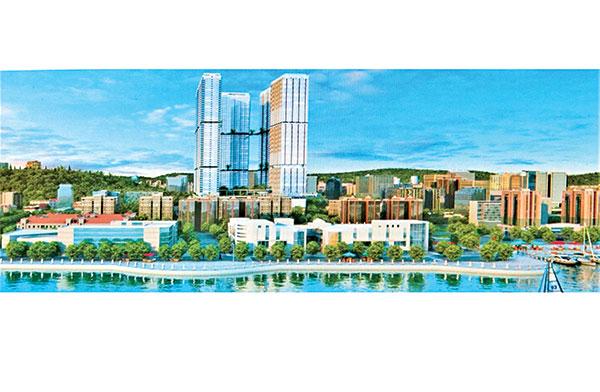 KK One to Replace Star City

This was revealed at the Sabah-Fujian Investment and Trade Cooperation project launch on Monday at Hilton officiated by Deputy Chief Minister Datuk Seri Panglima Wilfred Madius Tangau. Madius is also State Minister of Trade and Industry in charge of Sedco and SUDC. Sabah is renowned among China tourists for its seafood who throng restaurants next to Star City.

The China investors are expected to pump in US$500 million or up to RM3 billion as a start to create another tourism landmark on the Star City site with an expected date of completion in or after 2023.

The name KK One with a sunset scenery viewing deck beyond 200 metres high resonates with Taipei 101, the highest building in Taiwan a province of China opposite Fujian across the Taiwan Straits. Madius welcomed China investors to “Mainland Malaysia, as Sabah and Sarawak comprised more than 60 per cent of the landmass of Malaysia.”

He was optimistic of Sabah’s position in the One Belt, One Road scheme, reiterating that Sabah’s the one state with a sea link along the Lombok-Macassar Straits route linking East Asia and Australasia. He hopes to develop the logistics sector further with the participation of investors from China.

Sabah is one of the biggest beneficiaries of tourists from China and this fact was echoed by other speakers from China, including Feng Chuibin, President of Fusun International Holding Limited and Skyrich Development Sdn Bhd and Acting Consul-General Zhang He of the Consulate General of the People’s Republic of China in Kota Kinabalu.

“We hope we can join hands to upgrade communication and cooperation with Kota Kinabalu in all fields guided by the ‘Belt and Road’ framework, and seek greater cooperation at higher level in more fields which will serve as the solid foundation for economic and trade co-operation. Fujian has unlimited business opportunities.”

“Fujian has 53 recorded investments in Malaysia with contracted amount worth US$950 million. Malaysia has invested 662 projects in Fujian, totalling US$1.65 billion,” he said.

Local architect firm personnel Nip Man Voo indicated that the final height of the building is subject to approval from the DCA and other authorities.