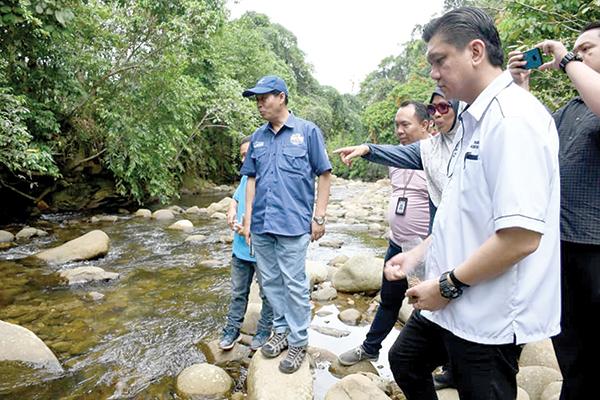 
Kg Kolosunan Inanam holds the potential to be developed into another rural eco-tourism destination in the West Coast of the State.

The area's streams and river which supply the Babagon dam are still pristine and filled with aquatic life, including fishes.

According to Mayor Datuk Nordin Siman, the area last year alone saw the arrival of about 600 local and foreign tourists, thanks to the Desa Cinta Kobuni Community Based Tourism programme by City Hall which has also contributed towards increasing the incomes of villagers there.

On the event, Nordin said rich biodiversity in the surrounding area saw as many as 50 researchers from various agencies from Sabah Parks, Universiti Malaysia Sabah, Wildlife Department and Sabah Museum being involved in the programme to document the richness of the flora and fauna in the area with discoveries and scientific discoveries, including a new species of Begonia flower called Begonia Kolosunonensis sp.

Meanwhile, when met, Chua said the purpose of the event was about exploring the environment there for conservation purposes while also looking at ways to improve the socio-economy of the local villagers through eco-tourism activities.

When asked about the rough condition of the road to the area, Chua said City Hall will work together with his office to upgrade the road leading to the area.

"There are plans to upgrade all village roads in the district as we have found that there were many weaknesses as well in terms of infrastructure in the villages. However, we will be doing it in stages since we are in power for a year only as of the Government.

"We are in the process of upgrading the roads in the area one by one, something that we have started since last year. However, for this area, due to its remote location, we will wait for the allocation of the next budget before it can be upgraded because of its eco-tourism potential," he said.