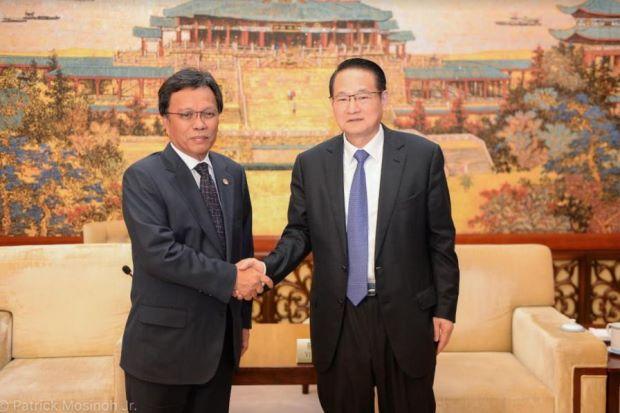 
Intending to boost industrialization in Sabah, Sabah and China's Jiangxi province are looking at a "sister province relationship".

Shafie, who is leading a Sabah trade delegation to Jiangxi, is looking at exploring trade, investment, agriculture and tourism to generate mutual benefits and promote common prosperity and development.

The Letter of Intent was signed Sunday (April 21) shortly after Shafie arrived in Nanchang City where he paid a courtesy call on Yi at the Qianhu State Guest House.

Shafie said he had chosen to come to China's south-eastern Jiangxi province due to its proximity to Sabah and its rapid economic growth.

He noted that the province's Gross Domestic Product climbed 8.7% to RMB2.19 trillion (RM1.35 trillion) in 2018 compared with the previous year.

Sabah already enjoys the most number of Chinese tourist arrivals in Malaysia but as the highest oil producing state and second largest in natural gas production, it has plenty to offer to Chinese investors too, the Chief Minister's office said in a statement issued here Sunday.

Yi proposed to Shafie that the relationship extend beyond trade and economics but they should also venture into culture and education.

Meanwhile, the Ma-Zhong Friendship Association of Sabah signed a Memorandum of Understanding with the Jiangxi People's Association for Friendship with Foreign Countries to promote friendly exchanges between local governments and the people of Sabah and Jiangxi.

Jiangxi, with a population of 46 million people, is largely known for fish and rice.

It also has deposits of 170 types of minerals and is home to the largest copper mine in Asia and the biggest copper smelting centre in China.

The Chief Minister also visited the headquarters of the Jiangxi Copper Corporation, which is listed in the Fortune 500 list.