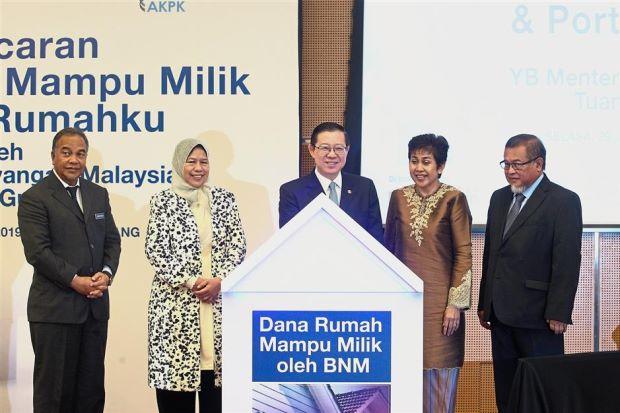 
The escalating home ownership and overhang conundrum in the country has become a top agenda for the government to resolve, with various housing policies and measures being implemented to spur buying and boost the current property market.

Following the launch of the National Housing Policy 2.0 on Monday, Bank Negara launched its Affordable Homes and Rumahku portal fund yesterday to kickstart home-ownership in Malaysia, ahead of the National Home Ownership Campaign in March.

"This is especially for properties below RM150,000. This fund will help because of the lower interest rate of 3.5%, in tandem with the home ownership campaign coming up," he told reporters on the sidelines after the launch of the fund yesterday.

The fund has an allocation of RM1bil and is aimed at helping home buyers from the lower income group nationwide to finance the purchase of their first homes.

The fund is eligible to Malaysian citizens with a maximum monthly household income of RM2,300 and do not have any record of impaired financing within the past 12 months.

The fund has a maximum tenure of up to 40 years or up to 70 years of the applicants' age, whichever is shorter.

The participating financial institutions for the fund are AmBank, BSN, CIMB, Maybank and RHB Bank.

"Of that, five have been approved, while the remaining 11 are still being processed," he said after officiating at the launch of the fund.

He said many banks today don't want to give out loans because the repayment requirements are not fulfilled.

"We would like to see if we can loosen the lending rules but Bank Negara has its own guidelines. This scheme serves as a kind of compromise. It will help those who had problems getting loans before."

Soam said a common question is whether there are available properties below RM150,000.

"There are properties (below RM150,000) even in Selangor, like the Rumah Selangorku because there are various categories and there will be a category below RM150,000."

Soam said such homes are also available in states like Johor, Kedah, Perlis, Pahang and Terengganu.

"But whether they qualify for the loan will depend on their ability to repay, which is also why AKPK has been roped in to ensure a bit of financial literacy," he said.

With a membership of over 1,000 members, Rehda is the leading representative body for private property developers. Soam said there is an oversupply of units below RM150,000 all over Malaysia, but could not disclose where these units were.

"There are still pockets of developments where the state cannot give us the name because these are controlled-price housing and the names have to come from the authorities.

"Some of the states are not able to provide the names to us, so we're asking the government to do it in a more robust manner on finding buyers for this category."

He said the cause of the overhang could be for a variety of reasons.

Soam said the Affordable Homes and Rumahku portal fund is a step in the right direction, adding that Rehda will be holding a press conference on Thursday to announce incentives on the upcoming National Home Ownership Campaign.

"There will be new initiatives. Some were announced at the Budget in November, but this Thursday there will be more incentives. We hope that this will spur buying for first-time homebuyers and also clear some of the overhang."

The first Home Ownership Expo, which be held from March 1 to 3, will see 180 developers showcasing over 20,000 units of overhang properties worth RM22.5bil with attractive discounts or packages for home buyers.

According to the National Property Information Centre (Napic), the number of unsold houses in the country reached a record high of 30,115 units in the third quarter of 2018, valued at RM19.54bil, which was a 48.35% increase from 20,304 units in the previous corresponding period.

On Monday, the Housing and Local Government Ministry launched the National Housing Policy 2.0, which outlined five focuses, 16 strategies and 57 action plans, of which 15 would be carried out in the first two years.

The five focuses include improving accessibility and affordability; quality housing for all; cohesive neighbourhoods; improving coordination between housing development and transportation; and strengthening institutional capability for the National Housing Policy.

Industry observers generally acknowledged that the effort was good but needed more directions. During the event, the government pledged to build 100,000 affordable homes by the end of this year, in line with the Pakatan Harapan government's manifesto to provide budget housing totalling one million over a decade.