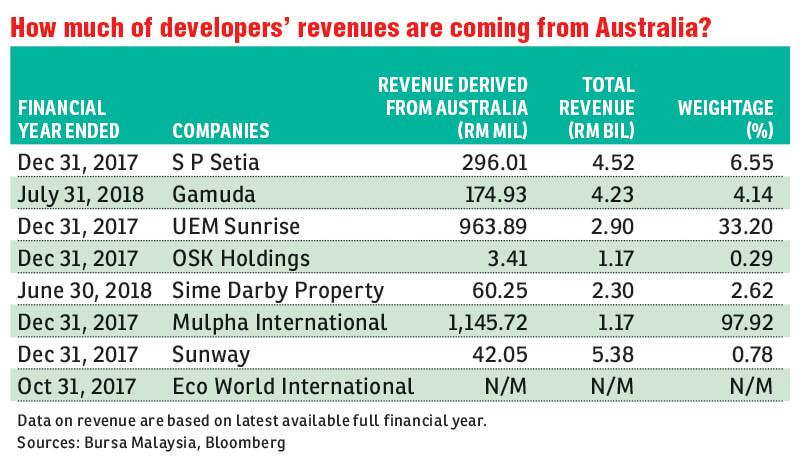 
With the sluggish property market in Malaysia, it is not surprising to see local property players expanding their presence to other countries, notably Australia and the UK.

But stepping into another country means being exposed to foreign exchange (forex) risk. Revenues and expenses in that country are not denominated in ringgit and as such are subject to currency fluctuations. Thus, any weakening of that country's currency could result in a lower revenue upon conversion into ringgit.

This is the situation now for Malaysian developers in Australia in the wake of the dropping Australian dollar. Another cause for concern is the slower property market Down Under.

Among Malaysian listed property developers undertaking projects in Australia, Mulpha International Bhd stands out when it comes to revenue contribution from that country. Some RM1.15 billion, or a whopping 97.92% of its total revenue, came from its Australian projects in 2017, according to the company's annual report for that year.

Another property player, UEM Sunrise Bhd, saw RM963.89 million, or 33.2% of its total revenue contribution, come from Australia in 2017, according to its annual report.

But, as noted by AmInvestment Bank analyst Thong Pak Leng in a report last Thursday, UEM Sunrise had said there were no defaults on its Melbourne apartment projects Aurora and Conservatory, and it was on track to settle the units which had been handed over.

"Aurora is fully sold while Conservatory had a take-up rate of 96% as at end-December 2018," said Thong.

As for other property developers such as S P Setia Bhd, Gamuda Bhd and Sime Darby Property Bhd, their Australian contributions are relatively minimal.

Kenanga Investment head of equity research Sarah Lim said that with the weakening Australian dollar, Malaysians could probably also consider buying properties there. This, she said, will boost the sales of Malaysian companies with projects in Australia, enabling them to clear their unsold units faster.

"The weakened Aussie dollar may actually encourage more people to buy [properties in Australia]," Lim told The Edge Financial Daily. "But for those who [have] already [booked properties there], the question is whether they are going to complete the sale."

She explained that in Australia, buyers can pull out from a sale, adding that they would only do so if their total ringgit investment value has dropped by more than their initial deposit. They would not react badly to "short-term foreign exchange hiccups".

From the developers' standpoint, Lim said they are not as forex-sensitive in general because the completion of the project has a longer gestation period, resulting in the forex impact to be averaged out during the period.

"This could affect their cost, but this could average out year-on-year, because it takes about a minimum three to four years to complete one project," said Lim, adding that the cost impact is difficult to see from a forex point of view and could only be seen when the project is completed.

"The cost impact on the forex is very hard to determine because you don't know when the developers have brought in or taken out the money," said Lim.

Furthermore, she noted that property developers are allowed to leave their money or earnings from their completed projects there to be deployed for their future investments, which means making them less sensitive to the volatility of the currency.

Affin Hwang Capital Research senior associate director Loong Chee Wei concurred, saying the weakening Australian dollar would not be much of a concern to property developers. He said the developers will focus on selling the remaining unsold units.

"They will be less aggressive in terms of launching new projects at this stage and will be focusing more on clearing the unsold inventory," said Loong.

Nonetheless, he said the weaker Australian currency means that when earnings are translated into ringgit, they will be lower.

The more important impact, he said, would be if the developers could still sell the units or if the project itself is making good profits in Australian dollar. The completion of sales will be affected by the slower property market there as well as weaker selling prices, he added.

The depreciating Australian dollar could also offer property developers the opportunity to increase their land bank down under.

Kenanga's Lim stressed, however, that forex is not the "main decider" for developers to build on their land bank in Australia.

She noted that while Australia is seeing a slowdown in the property market, and in the Melbourne central business district, high-rise condominiums are mushrooming.

"So if they want to increase their land bank, the question is can they launch fast enough," she said.

Additionally, she noted that developers, in general, do not store a lot of Australian land bank, and are "quite prudent" when it comes to land-banking there.

While buying land Down Under could be cheaper for property developers currently, Affin Hwang's Loong said the developers will still be cautious about buying new land for development as cash flow is still a challenge.

He explained that the developers will complete the sale of their unsold units before looking for new land bank, unless their financial position is very strong. He added that most developers will reinvest their earnings collected from the completed projects.

"At this point, unless the property developers are doing really well in Malaysia — a lot of them are stuck with inventories here — wanting to put in new money in Australia is a challenge," said Loong.

"Or if land prices drop so much, then it's very opportunistic to buy it, and [provided that] the developers have a very strong balance sheet, which at this point, I don't see many," he added.

Likewise, RHB Research Institute Sdn Bhd senior analyst Loong Kok Wen said developers have to be really careful as the property market in Australia has slowed down and the Australian government has tightened rules for foreign property buyers, especially in restricting the mainland Chinese buyers.

"It is not easy just because the Aussie dollar is cheaper now. Property developers have to be careful given that there is a slowdown in the region," she said.