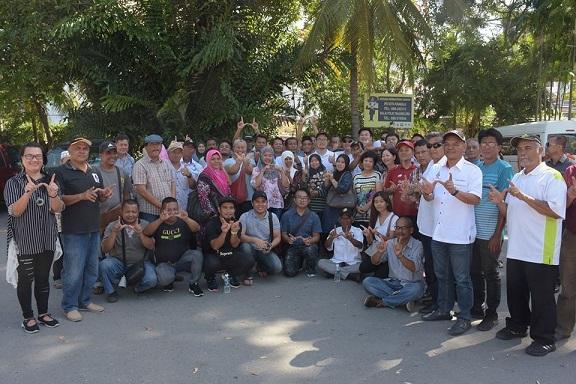 Hawkers to Move Back From Tanjung Lipat to Tanjung Aru

Some 70 hawkers who were evicted from Tanjung Aru Beach Food Court and subsequently relocated to Tanjung Lipat during the previous government's administration have been allowed to return to their original premises, said Agriculture and Food Industry Minister Datuk Junz Wong.

He hoped that the move back to Tanjung Aru would be realized as soon as possible, or better, before Chinese New Year.

Junz, who is also Tanjung Aru assemblyman, said that when contacted after meeting the hawkers and inspected the food court at Tanjung Aru Beach on Saturday.

The hawker stalls at Tanjung Aru Beach, which had been in existence for at least 50 years, have always been popular among locals and tourists.

However, the 70 hawkers were evicted from Tanjung Aru Beach Food Court to make way for the Tanjung Aru Eco Development (TAED) project introduced by the previous administration. Despite strong protests, the hawkers had no choice but to relocate to Tanjung Lipat in March last year.

Meanwhile, the food court was dismantled and only the outer structure was left behind at the beach.

Junz said all the hawkers were unanimous in their wish to operate in Tanjung Aru Beach, as their business was severely affected since they relocated to Tanjung Lipat.

He added that the operators were also dissatisfied with the lack of parking and poor business environment there.

Upon discussion with Mayor Datuk Nordin Siman, Junz said the former has agreed to allow these 70 hawkers to temporarily return to Tanjung Aru Beach until a final decision was made on the proposed TAED project.

He further said that even if a decision was reached on TAED, its implementation would take several years to complete.

Junz said the hawkers were happy with the arrangement and agreed to temporarily move their businesses back to Tanjung Aru Beach.

He added that Nordin was currently seeking solutions to some technical problems regarding this matter.

He said Kota Kinabalu City Hall (DBKK) would have to determine whether to rebuild the existing food court or provide a temporary structure for the hawkers to move in to.

"We hope to rebuild without incurring major costs."

He said DBKK should also reconnect the electricity and water supplies to the food court and ensure the safety of the building.

Meanwhile, the Ng sisters, who have been selling snacks and preserved fruits since their father started the business more than 40 years ago, expressed their strong desire to move back to Tanjung Aru Beach.

"There is no parking here and the space for each lot is much smaller," they said when met at the hawker centre in Tanjung Lipat.

They added that the current location at Tanjung Lipat was also quite far away from their home in Lok Kawi.

On top of that, the four sisters lamented that business has dropped about 50 per cent since they relocated to Tanjung Lipat in March last year, even though some other stalls were faring well.

They explained that tourists were drawn to the sunset at Tanjung Aru Beach, while those who visited the City Mosque at Likas Bay would not go all the way to the hawker stalls.

According to the sisters, there were 75 stalls operating at Tanjung Aru Food Court but only 69 hawkers moved to Tanjung Lipat.

The family was paying about RM500 to RM600 per month to DBKK to operate at Tanjung Lipat.

In the meeting with Junz on Saturday, the Ng sisters said they had conveyed to the minister their desire to move back to Tanjung Aru Beach.

They said Junz had promised that works to repair the structure of the food court would start today (Monday).

"We may drop by at Tanjung Aru Beach tomorrow if we are free to see whether works have begun on fixing up the food court."

"There is no parking here. And there is no view here.

Aunty Gemuk started helping out her mother in selling preserved mangoes at Tanjung Aru Beach in 1986. When SugarBun took over the space, she switched to selling juices instead.

Since relocating to Tanjung Lipat, she said her business had dropped drastically.

Apart from the lack of parking, Aunty Gemuk said there were fewer tables provided and the hawker centre was plagued with foul smell every evening.

"We (the hawkers) are very unhappy here."

Hence, she was grateful that Junz has allowed hawkers to move back to Tanjung Aru Beach.

"I hope we can move back to Tanjung Aru Beach as soon as possible."

Aunty Gemuk said many tourists have praised the beauty of Sabah but more could be done to tap into the view we have.

"For example, there can be water taxis connecting the resorts in Tuaran, Tanjung Lipat and Kota Kinabalu," she added.