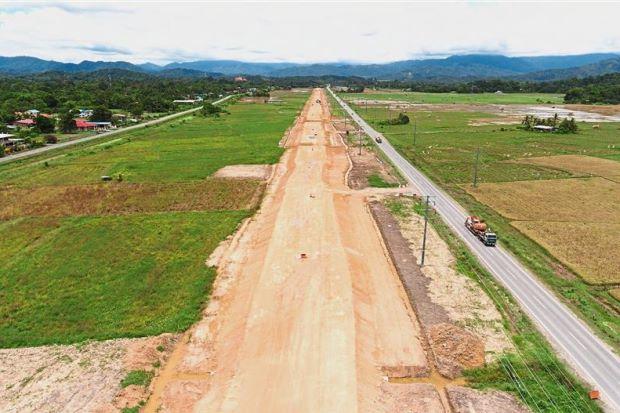 EastMalaysia
The Malay Mail, Photo Credit to The Star

Baru said that the completion was from the 12 packages implemented to date, and gave an assurance that the federal government will continue to oversee construction under the current list of contractors.

"The projects are still ongoing. We will try to finish it. As I said before, it is an important project that needs to be completed. We will do our best.

"I understand there have been some delays, but I do hope they will do it within the timeframe given," he told reporters at a civil engineering function here.

Baru said the timeframe of the project is stipulated in the current contracts, but did not give a date.

The Pan Borneo Highway was a landmark project of the Barisan Nasional (BN) administration that was meant to connect Sabah, Sarawak and Brunei in a long 2,325km dual carriageway.

It was first announced as part of the BN manifesto during the 13th general election in 2013, and officially launched by former prime minister Datuk Seri Najib Razak in March 2015 for Sarawak and April 2016 in Sabah.

The first phase for Sabah began with 35 work packages worth RM12.8 billion to build 706km of roads from Sindumin in Sipitang to Tawau, in the east coast. But the remaining packages have yet to be allocated.

Following the change of government in May last year, the Pakatan Harapan federal government said it would honour most of the contracts in order to complete the project, although some of the contractors may be dropped.

On whether the federal government would consider the request from the state to oversee the project themselves and potentially save RM2 billion in the process, Baru said that the decision was not up to him.

"There is a proposal from the state — there has been there for quite some time already — but whatever it is, the question should be addressed to the MoF who makes the call on the model," he said, referring to the federal Ministry of Finance.

Sabah's Infrastructure Development Minister Datuk Peter Anthony said that the state wanted to take over the implementation of the project under a committee that will be jointly headed by the Infrastructure Ministry as well the Economic Planning Unit under the state Finance Ministry.