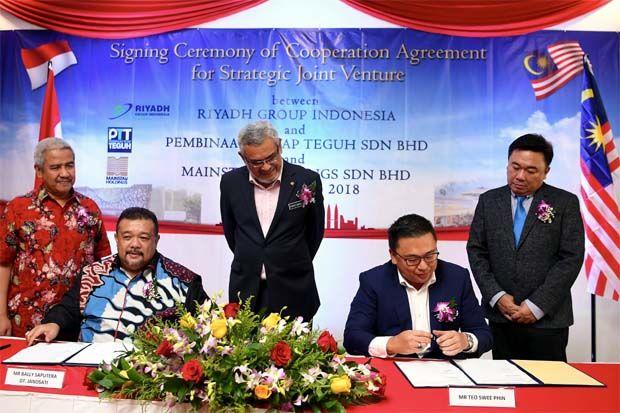 
Property developer Riyadh Group Indonesia is setting foot into the local property scene with an investment of US$450mil (RM1.88bil), to be spent over a 10-year period.

The investment has been earmarked for two projects - the revamping of a mall in Shah Alam and several developments over 10.35 ha of land in Serenia City, Sepang.

The group will be embarking on the two projects via a joint venture with two local firms - Mainstay Holdings Sdn Bhd and Pembinaan Tetap Teguh Sdn Bhd (PTT).

Riyadh Group yesterday entered into memorandum of agreement with Mainstay and PTT, and will hold a 65% stake in the JV.

The agreement also saw the Indonesian group acquiring a 65% stake in the two companies.

The first project will see the revamping of the 55,000 sq m Space U8 Mall in Bukit Jelutong, with the project expected to be completed in six months.

Riyadh Group's president director, Bally Saputra said they planned to create a "Little Indonesia" within the mall, featuring popular Indonesian cuisine, and boutiques selling Indonesian brands of clothing, among others.

He said they also planned to rename the mall, which was opened in 2011, to "Maha Karya Town Square".

The second project, with a GDV of RM1.7bil, is an enhancement of the planned Horizon Village Outlet development in Sepang.

The 10.35 ha land, owned by PTT, had originally been earmarked for the development of a premium outlet project.

"The plans consist of a two-storey premium outlet village and six tower blocks which will house two hotels, high-end serviced apartments, as well as a Riyadh International Islamic Hospital," Bally told reporters after the signing of the agreement.

On entering a challenging Malaysian property market, Bally said a slow market was a good opportunity.

"We should enter when the market is challenging, so we are not left behind when it recovers.

"Malaysia also has very good tourist arrivals, and we expect our project based in Sepang, being near the airports, to benefit from this," he added.