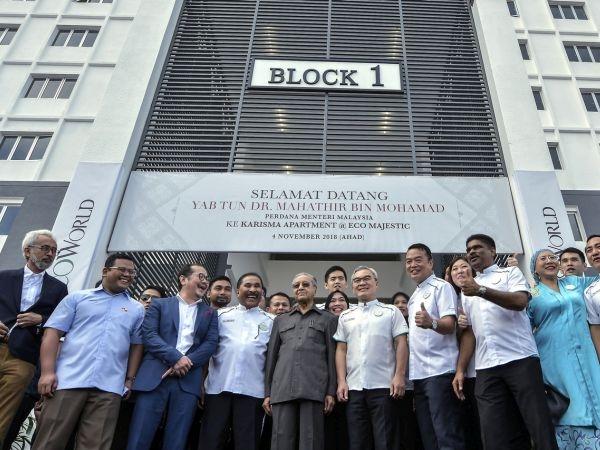 
Tun Dr Mahathir Mohamad is confident that the Property Crowd-funding solution announced in Budget 2019 can drive the building of one million houses in 10 years as promised by Pakatan Harapan in their manifesto for the 14th General Election (GE14).

The Prime Minister said the scheme, the first of its kind in the world, offered first time home buyers the chance to pay only 20 per cent to own a house while the remaining borne by investors via the peer-to-peer financing framework.

This, he said, would enable more people to own a house with minimum payment, which could be settled by their savings, loans or Employee Provident Fund (EPF) withdrawal.

"They can borrow money from banks and the money will be their contribution for the purchase, just 20 per cent of the price of the house, the balance (80 per cent) will be bought by investors.

"It's also like REIT (Real Estate Investment Trust) juga... where anyone who wants to invest can do so…this does not mean the investor will enter the home, just claim ownership to the level invested but the house fully belongs to the buyer," he said after launching FundMyHome.com a digital platform which offers a similar scheme to the Crowd-funding Property solution.

On Friday, Lim, when tabling the Budget 2019, said the peer-to-peer (P2P) financing framework, which would be regulated by the Securities Commission, will go "live" in the first quarter of next year for first-time home buyers.

Asked on the safeguards that have been put in place by the Government, Dr Mahathir said the risk for the bank to lend money to the house buyer would be very low.

"The amount to be borrowed is very small, so banks of course must use prudence in lending money, but because this involves only a small amount of money, the borrower will have sufficient income to pay back the loan.

"The danger of people running away, not paying...if they run away, the house is empty, so you can occupy the house," he said. The Prime Minister who described the scheme, initially proposed by Tong before being approved by the Government, as "fantastic", said it could also solve the issue of unsold houses.

However, Dr Mahathir stressed that the success of the scheme would depend on its results after being fully implemented soon.

Dr Mahathir had also expressed commitment that the Government would try its best to built one million houses as promised, although it was not easy to achieve with a lot of unsold houses today built at higher prices which were beyond the affordability of the people.