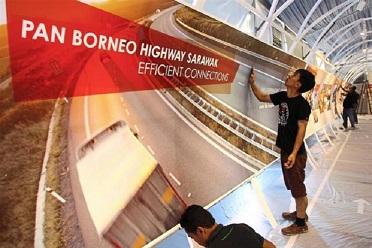 
It is most assuring that the federal Works Minister has recently said the Pan Borneo Highway (PBH) in Sarawak and Sabah will be toll free. He made the statement to clarify media reports which quoted the Prime Minister saying that it was difficult to build toll-free highways.

In fact, the Works Minister further assured that the Pakatan Harapan government wants to ensure that the PBH will be completed as scheduled to facilitate growth and development in the two states.

There is little doubt that the PBH will be one of the key drivers in the development of Sabah and Sarawak as the highway will provide easier access to remote regions as well as reduce the cost of tra­velling between the two states and also Brunei.

As can be seen from the numerous highways spanning Peninsular Malaysia, roads provide much impetus for many formerly remote regions to connect to the ports and related industries in search of markets. Similarly, the vast rural expanse of Sarawak will experience tremendous growth potential and provide the much needed push towards development when the PBH comes within reach through the connecting roads.

While the PBH is one of the key ingredients for the development of Sarawak, there is much to be desired for other remote areas, particularly in accessibility.

Roads are lacking despite over 50 years of being in the federation and amenities such as water and electricity are still novelties in many rural settlements.

It is quite a shock for many to know that despite the vast reserves of hydro power in the state, some areas just kilometres away from the dams are without electricity, including some rural schools and clinics.

Sarawak certainly needs much urgency in addressing these inequalities between the urban and rural areas and it is time for all concerned to prioritise these needs.