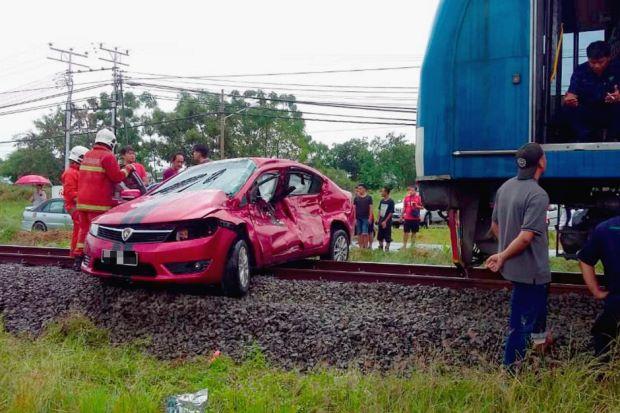 
Several approaches, including stopping rail services from Kinarut, are being looked at to minimise and prevent accidents involving vehicles and trains, following the latest accident which saw a man killed and another in a coma.

State Infrastructure Development minister Datuk Peter Anthony said, for now, they are looking into either halting the Sabah Railway services between Kinarut and Kota Kinabalu, or placing keepers at boom gate junctions to man the traffic.

He said the halt for railway services from Kinarut to Kota Kinabalu was because of the accident on Wednesday (Sept 26) evening took place during heavy traffic.

He said they may consider providing shuttle buses from Kinarut to Kota Kinabalu if this plan is adopted.

"Boom gatekeepers can also be used in case the gates malfunction or the signals and bells to alert drivers don't work," Anthony said after a function here Thursday (Sept 27).

Daniel Shafwan Omar, 21 was killed while his friend Mohd Amir Khairi Abdul Ghani, 20, remains in critical condition after the car they were travelling in was dragged for about 200m following a collision with a train along Jalan Kepayan, near Petagas here.

Anthony said the accident on Wednesday (Sept 26) was due to a faulty boom gate.

"We are waiting for the full report from investigators to find out the reason for this malfunction," he said, adding the Railway Department has been facing vandalism and cable thefts on their railway and gates for quite some time.

He said scheduled checks were conducted on all rail checkpoints and immediate repair works carried out on faulty gates, so they suspect the faulty gate could be a result of vandalism or cable thefts.

"We need to wait for the report from investigators before we can take further action on this part," Anthony said.

The starting point of the Sabah State Railway is at the Tanjung Aru Kepayan station. Another station is located near Petagas (Kota Kinabalu International Airport).

Meanwhile, Anthony said the ministry, as well as Railway Department, will assist the accident victims in any way possible.