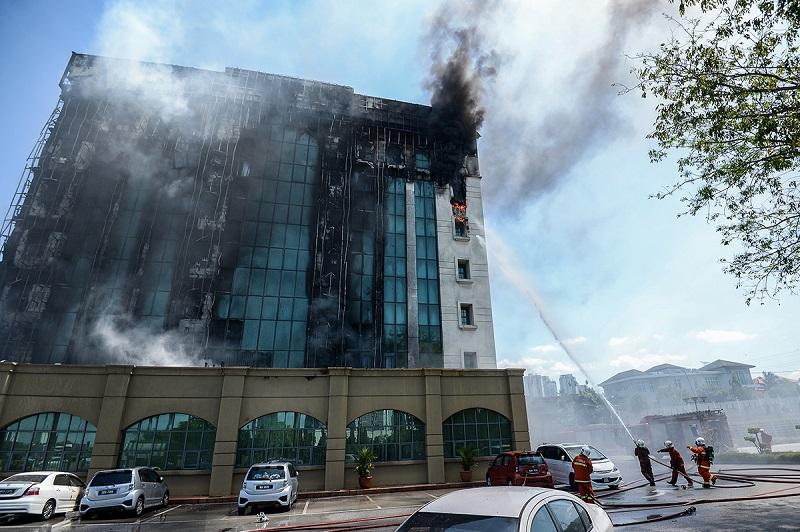 
Plastic cladding outside the Employees Provident Fund (EPF) building at its Jalan Gasing branch caused the blaze triggered by maintenance work to spread rapidly and engulf the exterior, according to preliminary investigations.

Fire and Rescue Department deputy director-general of operations Datuk Soiman Jahid said the fire, which was put out in under 30 minutes, started on the first floor of the building after sparks from restoration works ignited the polyethene cladding.

He added the flammable cladding, which covered much of the building's faÃ§ade, is believed to be unapproved.

"We have previously advised the public not to use flammable cladding for their buildings, as it may be cheap, but poses a great risk to life and property,

"With this incident, it will be the first recorded case of a fire involving flammable building faÃ§ade in Malaysia" Soiman said, likening it to the Grenfell Tower fire in London on June 14 last year, which resulted in 71 deaths.

"The use of such flammable materials as the cladding is against uniform building by-laws. We will be doing enforcement work nationwide, especially on buildings' fire certificates.â€

He added that buildings with such flammable claddings will no longer be certified by the Fire Department or obtain renewals until these are removed or replaced.

Commenting on the blaze, he said the fire spread rapidly from the first floor to the fourth and parts of the sixth, but did not penetrate the building's interior.

He added that no documents were lost save for some "unimportant filesâ€ on the sixth storey.

He said hot weather and winds also exacerbated the spread of the fire, which damaged approximately 40 percent of the building.

The department was alerted to the fire at 11.52am, with the first fire engine arriving six minutes later.

Over 70 fire and rescue personnel took around 30 minutes to douse the flames.

"There are no casualties or injuries, and all 527 EPF staff were quickly alerted to the fire and managed to evacuate safely to the adjacent car park-cum-rescue area" Soiman said.

EPF assures stakeholders that the fire has in no way compromised the integrity of data or it's members savings.

In a statement following the fire, EPF also said they were working closely with the Fire and Rescue Department to ensure the fire was contained.

"We would also like to assure members that there has been no compromise to data integrity or members savings in any manner.

"We will continue to monitor the situation as it develops and will provide an update once the branch is back in operations" according to the statement.

"As the safety of customers and staff is our prime concern, total evacuation of the building has been taken, and office and counter services are closed until further notice.â€