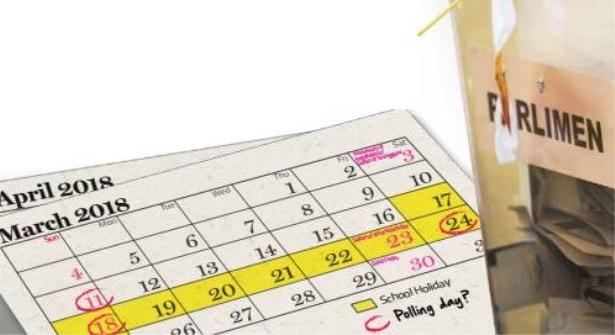 
PETALING JAYA: The 14th general election is likely to be held between April and mid-May, with the window to call for polls this year practically slammed shut.

The Barisan Nasional's five-year term ends on June 24 next year, and an election must be held within 60 days following the dissolution of the Dewan Rakyat.

It is anyone's guess when Prime Minister Datuk Seri Najib Tun Razak will seek the dissolution of Parliament, but much of the speculation has been about dissolution after Chinese New Year in February with polls in March.

There is even a WhatsApp message going around claiming that the dissolution will be on Thursday.

Analysts and sources, however, noted several key events taking place which points to a sweet spot of opportunity between the end of the Chinese New Year celebration and the start of the fasting month in May.

Prof Dr Shaharuddin Badaruddin of Universiti Selangor said it is not likely that polls can be held this year.

"Even if the Prime Minister dissolves Parliament tomorrow, it normally takes between three weeks and about a month for polling to be held.

"This would mean polling will be in mid-December, right in the middle of monsoon season when floods often occur in the east coast states in the peninsula" he said.

Shaharuddin added that January would be a busy time for parents settling in their children for the new school term, followed by Chinese New Year which falls on Feb 16.

Prof Dr Sivamurugan Pandian from Universiti Sains Malaysia expects GE14 to be held sometime between April and the start of Ramadan.

"I feel it will more likely be in April as this will allow Najib to give a full report card of his successes after completing nine years as Prime Minister" he said.

Najib was appointed as the country's leader on April 3, 2009.

Sources said elections after May would be cutting it too close to the start of fasting followed by Hari Raya Aidilfitri in June.

Despite the window, analysts point out that there have been cases where Parliament was dissolved unexpectedly.

Two examples are in 1999 when polling was on Nov 29 during monsoon season, and in 2008 when Parliament was dissolved on Feb 13, six days after Chinese New Year.

Wanita Umno chief Tan Sri Shahrizat Abdul Jalil said the Prime Minister has given no hint so far on when the elections would be held.

"Each time we ask him, he would just smile and ask us if we are ready. He has told us to be ready anytime" she added.

"The election obviously cannot be held during the monsoon so the window to have it this year is closing shut" he said.

Abdul Rahman said Najib, who is Barisan chairman, will decide on a date to seek the dissolution of Parliament after taking into account many factors and after consultation with the coalition's component party leaders.

"We, as the Government, have done our best, and we feel support from the people increasing.

"The people believe in our economic policies and vision for Malaysia which is doable and practical compared to what the Opposition is promising" said Abdul Rahman, who is also Minister in the Prime Minister's Department.

Amanah communication director Khalid Samad, meanwhile, said the Prime Minister should call for an election as soon as possible.

"The Opposition is getting more organised, the price of oil is increasing and his popularity is not going up, this would be the best time for him" said Khalid.

He said this was because the re-delineation exercise would have been completed with new constituency borders approved by Parliament.

"The re-delineation exercise will be very advantageous for the ruling coalition and they want that completed before the polls" he said.

Sallehen also brushed aside talk that the election may be held in December this year.

"I don't think it will be held in December due to the rainy weather and floods" he said.