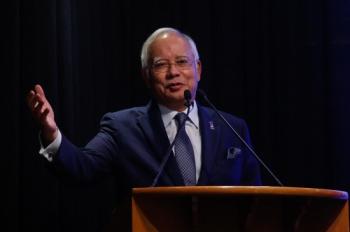 Patiently Waiting for the Pan-Borneo Highway

When the federal government announced in 2013 that it was determined to build the Pan Borneo highway which would make driving 2,000km from Kuching to Kota Kinabalu a more comfortable and pleasant journey, the locals heaved a sigh of relief.

When tabling Budget 2015, Prime Minister Datuk Seri Najib Abdul Razak (pix) announced that there would be an allocation for the highway which would bring development to the area.

The toll-free highway estimated to cost more than RM29 billion (RM16.49 billion for the road in Sarawak and RM12.86 billion in Sabah) and expected to generate economic growth, has long been anticipated by the people in both states.

It is scheduled to be completed by 2023.

For contractor Abdul Hadi Abdullah, 52, the highway means his long journey from Kuching to Miri and sometimes onwards to Limbang several times a month would no longer be tedious.

Where once he had to tail behind large lorries which heaved their way through the country roads, Abdul Hadi is now more than glad to see construction work along the roads which are now being widened as part of the highway project.

Certainly, he said, he would not be complaining about the dust and puddles along the roads because they mean that work is being done to build the promised highway.

In the case of Edward Stephen Subeng, who is in his 60s and has been travelling from his home in Sibu to his workplace in Kuching for three years now, the highway means that he no longer has to choose between a long, tiring road trip or an expensive plane ride.

For people like Abdul Hadi, Edward and other travellers like them, the Pan Borneo Highway will be a dream come true.

In a recent statement, Works Minister Datuk Seri Fadillah Yusof said that although there was some delay in parts of the highway project due to problems in land procurement, work was going on in nine other areas and that the highway is expected to be completed as scheduled.