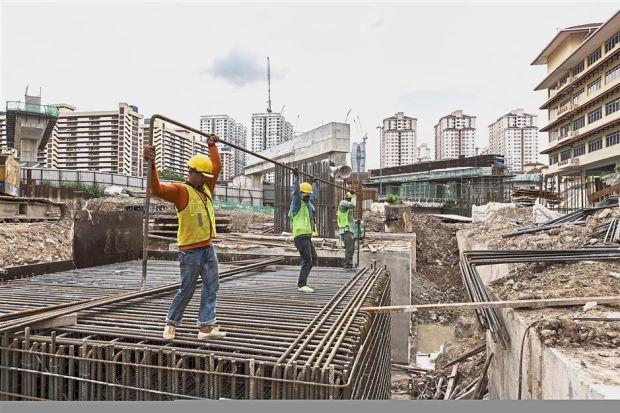 Maybank Investment Bank (IB) Research, which is maintaining a "positiveâ€ call on the construction sector, expects more construction jobs in the second half of 2017 and into next year.

The research house said construction companies with healthy order books would benefit the most as infrastructure projects pick up.

"Our sector top â€˜buy' pick is IJM Corp as a direct proxy to growing Chinese investments in Kuantan through MCKIP and Kuantan Port.

"Sunway Construction is our mid-cap pick as the only pure major construction stock with strong earnings visibility and the potential for higher order book replenishment" it said.

The research house said the slower pace of infrastructure job awards in the first half of this year could have been due to the high of RM88bil in 2016.

"We expect the momentum on contract awards and job flows to pick up again in the second half of 2017, continuing into 2018.â€

Based on historical trends, Maybank IB said the second half of 2017 should see infrastructure job awards picking up, with the major packages of the RM9bil Kuala Lumpur Light Rail Transit 3 expected to kick off first.

"The tabling of National Budget 2018 slated for Oct 27 is a key event to reaffirm infrastructure development with financing from direct government development expenditure and of the government's balance sheet" said Maybank IB.

The research house believes earnings delivery could be a further re-rating catalyst for the sector given the robust outstanding order books and decent order book cover ratios.

"We expect companies with exposure to the Klang Valley Mass Rapid Transit (KVMRT) 2 (Gamuda, IJM and Sunway Construction within our coverage) to report relatively stronger earnings as work progress accelerates from the second half of 2017.

"However, construction progress at the Pan Borneo Sarawak Highway which has been slow due to finalisation of contract details would delay meaningful earnings contribution expected in the third quarter of 2017 to the fourth quarter of 2017 or first quarter of 2018.â€

Maybank IB also expects the major civil works tender to kick off in 2018, as the Kuala Lumpur-Singapore High-Speed Rail AssetsCo tender is only expected to be called in the fourth quarter of this year.

"In 2018 too, we expect the Bandar Malaysia development (with a gross development product of RM150bil) to have selected a new master developer for the request for proposal currently ongoing. Over the longer term, the KVMRT 3 project could acquire Cabinet's approval by mid-2018 with contract awards potentially in 2019" said the research house.