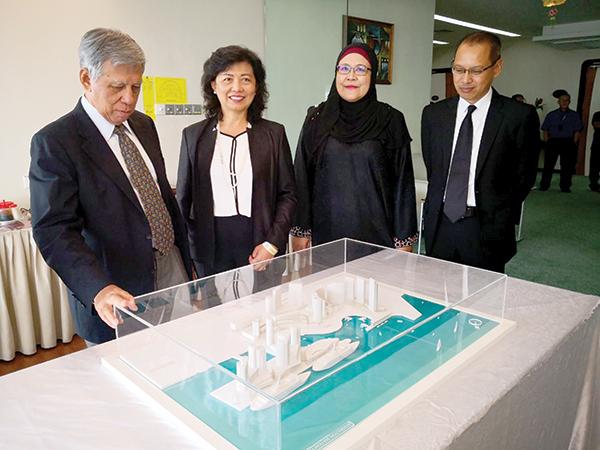 
Major development plans covering some 75 acres are in store for the existing Kota Kinabalu Port, especially over the next 10 to 15 years.

With an estimated RM10 billion gross development value, Suria Capital Holdings Berhad, in collaboration with Yayasan Sabah, aims to develop the port into a new city which will see, among others, the establishment of Jesselton Quay, Jesselton Waterfront and International Cruise and Ferry Terminal.

He is bullish that the major transformation of the Kota Kinabalu waterfront will be the game changer to re-create the Kota Kinabalu City skyline and ultimately elevate the competitiveness of the city in attracting domestic and foreign investments.

He announced this in a media conference after chairing Suria Capital’s 36th Annual General Meeting 2019 at Wisma Sabah Ports in Sepanggar, near here, Thursday.

On a separate development, Ibrahim said Suria, through its engineering arm, is currently involved in a RM49.5 million rail-upgrading project which links Halogilat Station to Tenom Station with a total distance of 27km.

He noted that there have been many challenges in the implementation of the project, particularly in sourcing materials and getting payments for the progress works done.

He assured, however, that Suria strive to complete the project by end of this year.

Ibrahim also announced a 14 per cent increase in the group’s operating revenue, which he attributed mainly to higher contributions by port operations.

He also noted Sabah Ports’ successful extension of the Sandakan Port wharf by additional 281 metres at a total cost of RM129.4 million to overcome congestion.

The new wharf was officially launched on Feb 21, this year by Chief Minister Datuk Seri Mohd Shafie Apdal, making it possible for six vessels to berth at Sandakan Port at any one time.

“Extension works are expected to commence by end of 2019, with target completion within two years,” said Ibrahim.

Once completed, he said, the SBOT would have twin jetties that could accommodate vessels up to 60,000 Deadweight tonnage (DWT).

Concurrently, Sabah Ports will construct a new general cargo terminal in Sapangar Bay to allow the relocation of existing operations from Kota Kinabalu Port, in view of the planned commercial developments taking place in the vicinity.

To achieve Sabah Ports’ vision “to be the ports of preference in the BIMP-EAGA Region,” Ibrahim said efforts will be concentrated on further enhancing the efficiency at the ports to support the economic development of the State.

“All the major port activities for the West Coast of Sabah will eventually be centralised at Sapangar Bay, from the handling of containers, liquid cargo and conventional cargo to the handling of Roll-on/roll-off (RORO) ship services,” he said.