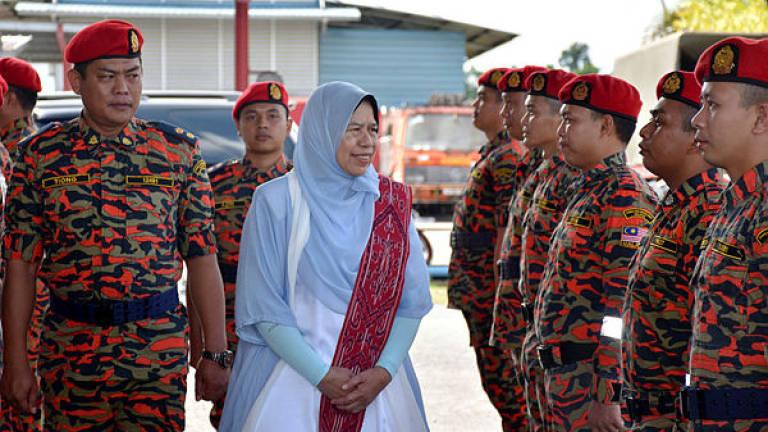 
The Housing and Local Government Ministry (KPKT) calls on the Sarawak government to allocate suitable land to the ministry to build more affordable houses in the state.

Minister, Zuraida Kamaruddin said so far there was no formal grant of land from the state government to the ministry although the ministry's officers had identified several suitable sites.

"We have a little problem actually as the state government has not given any land to the ministry to build affordable houses. All other states have given over identified land for us to develop but this is a problem we face with Sarawak.

"I hope the state's executive councillor in charge of housing, as well as Chief Minister (Datuk Patinggi Abang Johari Tun Openg) will respond to us so that we can help build affordable houses for the people in Sarawak," she told a media conference during her visit to the Sungai Merah Fire and Rescue Station today.

In another development, Zuraida also said that locations for the building of E Category fire stations were being identified with construction slated to begin next year.

She also said that her ministry would give priority for machine allocation to fire stations in Sabah and Sarawak especially in the remote areas.

Meanwhile, according to Sarawak JBPM director Khirudin Drahman, out of the 50 fire stations needed in Sarawak, 14 were Category E stations where a few full-time firemen and auxiliary firemen would be stationed.

"This is a win-win move we had to take as the government had limited the recruitment of new officers. We understand the economic situation so we have to be creative in ensuring that we have an adequate number of firemen in Sarawak," he said.

He said so far there were 32 fire stations in operations in the state with four new ones still under construction and expected to be ready by the end of the year.

After visiting the station, Zuraida visited the family of Mohd Sapee Julaihi, 55, a fireman who died in a snake-catching operation in Taman Permai last Friday.

Mohd Sapee, a divorcee left behind four children aged between eight and 18, complained of chest pain and difficulty in breathing after the 4am operation.

He was rushed to the hospital for treatment but was confirmed dead at 7.57am.